Review: "Tsotsi" a Familiar Tale from Another Place 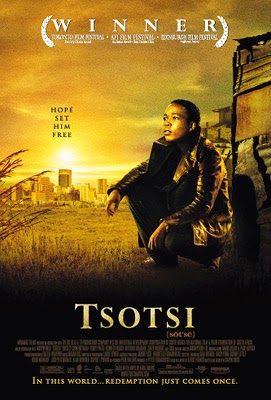 The subject of this movie review is Tsotsi, a 2005 South African drama adapted for the screen and directed by Gavin Hood.  The film is based on the 1980 novel, Tsotsi, from author Athol Fugard.  “Tsotsi” is apparently a slang word in Johannesburg, South Africa that can be translated to mean “thug.”  Tsotsi the film follows six days in the violent life of a young Johannesburg gang leader.

Tsotsi (Presley Chweneyagae) is a ruthless hood living in an impoverished township in Johannesburg, South Africa, where he leads the trio of miscreants that make up his gang.  One night he shoots a woman (Nambitha Mpumlwana) in a well-to-do suburban neighborhood and drives off in her car, but he discovers that he isn’t alone.  The woman’s infant son is in the backseat, so he grudgingly takes the infant to his humble abode.  Through his efforts to care for the baby, Tsotsi (his nickname is urban slang that loosely translates to “thug”) rediscovers compassion, self-respect, and the capacity to love, but he still struggles with his old ways.

Tsotsi won the 2006 Oscar for “Best Foreign Language Film of the Year” as a representative of South Africa. The film is sturdy and earnest, and maybe a little too melodramatic in its too obvious determination to spend a yarn of moral redemption.  Still, the film is powerful and the emotions run deep and are raw, primarily because of the lead character’s hardened criminal life.  It’s kind of hard to be sympathetic towards Tsotsi because his decisions lead to the murder of an innocent man and the wounding of several others.

What makes Tsotsi rise above preachy, well-meaning social drama is that this is basically a familiar tale, but set in an unfamiliar place with strange and exotic characters.  In that way, Tsotsi engages the viewer to discover a new way of looking at a familiar premise.  The performances are good, though not great.  Presley Chweneyagae, however, is a solid actor and carries the film like a veteran movie star.

2006 BAFTA Awards:  2 nominations:  “Best Film not in the English Language” (Gavin Hood and Peter Fudakowski) and the “Carl Foreman Award for Most Promising Newcomer” (Peter Fudakowski-producer)