Review: "The Lone Ranger" is a Little Bit Stranger 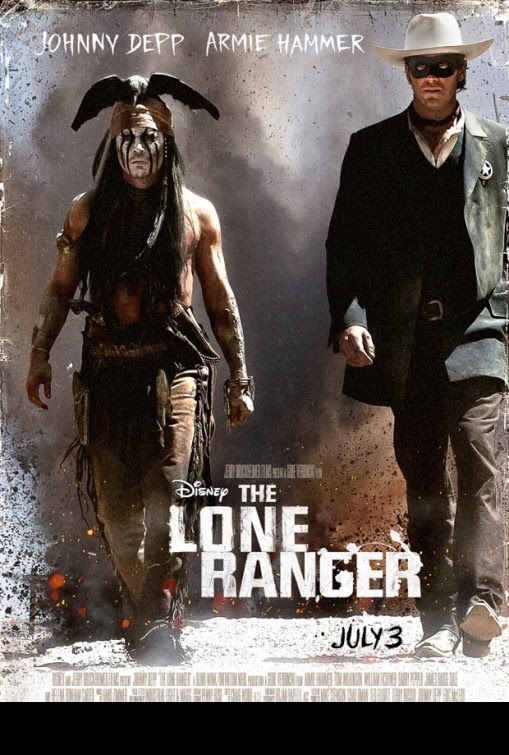 WESTERN/ACTION with elements of fantasy

The radio show ran from 1933 to the mid-1950s for almost 3,000 episodes.  The character is probably best-remembered for the television series, The Lone Ranger, which aired for eight seasons (1949 to 1957) for over 200 episodes on the ABC television network.  Clayton Moore starred as the Lone Ranger, and Jay Silverheels played Tonto.  The character also made several appearance in film, the last being an infamous and unsuccessful 1981 movie.  Early in the Summer of 2013, the Lone Ranger and Tonto returned to the big screen.

The Lone Ranger is a 2013 action and Western film from producer-director Gore Verbinski and producer Jerry Bruckheimer.  Starring Johnny Depp and Armie Hammer, The Lone Ranger 2013 focuses on the earliest efforts of The Lone Ranger and Tonto to end corruption in and to bring justice to the American Old West.

[A NOTE:  Since the following review is a longish one, I’ll summarize it here.  I thoroughly enjoyed The Lone Ranger 2013, and had a blast watching it.  However, it is not a traditional Western movie, just as the Pirate of the Caribbean movies are not typical pirate movies.  The Lone Ranger is funny, but quirky.  If you look past its oddness and focus on the action, you might find it to be quite entertaining.]

The Lone Ranger opens in 1933 at a fair in San Francisco.  In a sideshow, a boy named Will (Mason Cook) just happens to meet an elderly Native American who claims to be Tonto (Johnny Depp).  Learning that Will idolizes the Lone Ranger, Tonto tells the boy the story of how he first met the legendary hero.

The story moves back to 1869.  Lawyer John Reid (Armie Hammer) returns to his hometown of Colby, Texas.  He finds the Transcontinental Railroad to be the focus of attention, but railroad tycoon, Latham Cole (Tom Wilkinson), is focused on the capture of outlaw, Butch Cavendish (William Fichtner).  John joins his brother, Texas Ranger Dan Reid (James Badge Dale), who leads the search for Cavendish and his gang.

John discovers that Native American Comanche warrior, Tonto (Johnny Depp), is also searching for Cavendish, whom the Indian believes is a creature he calls “windigo.”  Events leave John a “lone Ranger,” and he is forced join Tonto in an often-contentious but effective partnership.  But can the two new partners stop a conspiracy that is bigger and older than they may realize?

I think that the movie reviews which accompanied The Lone Ranger upon its initial theatrical release back in late June 2013 can be described as mostly negative to mixed.  I unequivocally like this movie, although I will admit that it has some flaws.  For instance, I have a question that has already been asked by other critics.  What is the target audience for The Lone Ranger?

The Lone Ranger 2013 is a Western.  It has several elements that can be found throughout the history of American Western films:  brothels, construction of a railroad, cowboys and Indians, lone lawman, outlaws, quests for redemption, revenge, and the shoot ‘em up.  However, this new Lone Ranger is nothing like The Lone Ranger television series, which was a traditional Hollywood Western aimed at a general audience and relied on stock elements that were familiar to viewers of all ages.

This movie is also a comedy and action flick as much as it is a Western, but it is not reverent about the things found in many Western movies and television programs from the 1930s to the 1950s.  The film has those big, reality-bending action scenes we have come to expect of Jerry Bruckheimer movies like the Pirates of the Caribbean franchise (which also stars Johnny Depp).  As a comedy, the film sometimes mocks elements and aspects associated with The Lone Ranger franchise.  Some of the dialogue and scenes in this movie have a single purpose – be funny.

The Lone Ranger 2013 is also surprisingly quirky.  It is kind of a “weird Western,” like the films, Jonah Hex and Wild Wild West (1999).  The movie has a strange mixture of imitation Native American mysticism and quasi-occultism, with a funky supernatural twist.  Much of that is tied to violence, cannibalism in particular.

I think that in order to enjoy this film, the viewer has to focus more on the basic plot, the characters, and the big action scenes and sequences and less on the setting (the post-Civil War “Old West”) and genre (the Western).  I didn’t mind that The Lone Ranger is an unusual Western film, and I certainly like the plot, characters, and action set pieces.

Also, Armie Hammer turned out to fit in this movie better than I thought he would.  Still, to me, it seems as if he can never make his character, John Reid/The Lone Ranger, escape the tremendous shadow cast by Johnny Depp’s Tonto.  Depp owns this movie, and that is a bigger problem for this movie than anything else.  It is more about Tonto than it is about The Lone Ranger.  In fact, whenever the story switched to other characters, I could feel myself chomping-at-the-bits for the movie to go back to Depp/Tonto.

I have to admit that I wish that we get a sequel to The Lone Ranger.  That is unlikely, as this movie is considered a box office disappointment and, to some, a flop.


Posted by Leroy Douresseaux at 11:47 AM