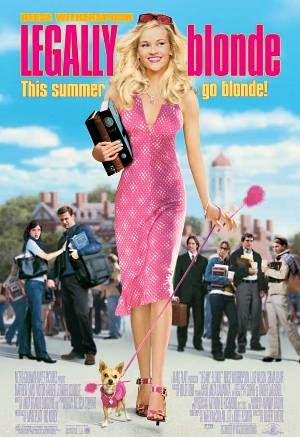 The subject of this movie review is Legally Blonde, a 2001 comedy starring Reese Witherspoon.  The film is based on the 2001 novel, Legally Blonde, from author Amanda Brown.  The film focuses on a blonde sorority queen who follows her ex-boyfriend to law school after he dumps her and discovers that she has more legal savvy than she or anyone ever imagined.

Legally Blonde is trash.  Let’s get that straight, so we don’t fool ourselves.  Another fish out of water story with the stereotypical dumb blonde, sorority/fraternity cardboard cutouts, Ivy League elitists, lecherous bosses etc.  It does have one redeeming element – the incomparable and very talented Reese Witherspoon.

Ms. Witherspoon is Elle Wood, a blonde sorority queen, fully prepared to receive an engagement ring from her boyfriend Warner (Matthew Davis), when he suddenly dumps her, pleading that he needs someone smarter than her – someone who would better fit his law career and political ambitions.  Elle decides to follow Warner to Harvard Law School in order to win him back.  Of course, Harvard admits her so that we can even have a movie, although, in reality, they would have ignored her.  But one can understand that Reese/Elle’s charm and bubbly personality not mention her knockout body, would win over even the most conservative and pickiest college admissions officers.

Ms. Witherspoon is a talented actress, and, not only is she likeable, she is outright engaging and has an aura of pure friendliness.  Her movies are a win-win situation for the audience.  Legally Blonde is unadulterated B-movie material that she elevates to uproarious comedy.  Being funny isn’t enough.  The audience has to like her, and she has to sell them on her personality because the movie is all about her.  She does the job winningly.  Notice how I can’t stop gushing.

What else is there to say?  Sometimes, the star is the movie, and the star is so good that she can make a diamond out of a handful of coal dust.  Even when the movie stumbles, Ms. Witherspoon is still a delight to watch.


Posted by Leroy Douresseaux at 10:38 AM