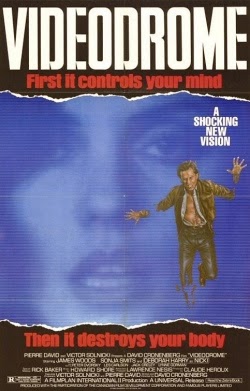 SCI-FI/HORROR/THRILLER with elements of fantasy

The subject of this movie review is Videodrome, a 1983 Canadian science fiction and horror film from writer-director, David Cronenberg.  Possessing elements of the “body horror” genre, this film focuses on a sleazy cable television programmer who acquires a new kind of programming for his station then, watches as everything, including his life, spins out of control.  The film received eight Genie Award nominations (once Canada’s top film award), and won four, including a best director honor for Cronenberg (who shared the win with Bob Clark of A Christmas Story).

Although the term “visionary director” is bandied about so often (even more so now with so many movie reviewers and film critics crowding information space via the Internet, print, and televised media), Canadian filmmaker David Cronenberg is truly a visionary as displayed in his film Videodrome.

The film has the usual characteristics of a Cronenberg production:  bodily invasion and penetration, body alteration, hallucinations, rape paranoia, and altered realities.  While certainly heavy with sci-fi and horror themes, Videodrome is firmly rooted in everyday reality.  The film deals with how television and video images can physically, as well as mentally, alter and affect the human body.  Cronenberg’s most successful experiment in this film is to make the viewer as totally lost and confused as Max Renn is.  We truly don’t know anymore than he does, and he holds no clues secretly in head from the viewer.

The film’s third act is one of the most brilliant film portrayals of altered perception, as it becomes almost impossible to say what is the real world and what is imagination and hallucination.  Even more brilliant, Cronenberg creates this sense of detachment from reality without loosing the viewer.  We may never know what is meant to be “real,” as this film draws to its shocking finale, but we can’t look away.

Videodrome does drag a little in the first act, but Cronenberg is a smart filmmaker of smart films that unveil slowly and intelligently before our eyes.  It is a dazzling examination of how TV has and is changing humanity – truly a movie masterpiece of the late 20th Century.


Posted by Leroy Douresseaux at 11:24 AM