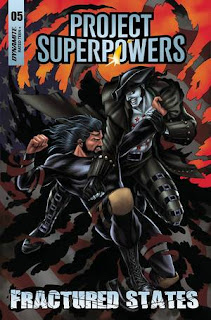 Project Superpowers: Fractured States Volume 1 #5 opens in Gettysburg, Pennsylvania in the year 2037.  John Doe is trapped in a void with the other missing heroes, and the one who imprisoned them is the “American Spirit,” who is in the thrall of a mysterious adversary.

Who exactly is John Doe?  Is he a hero, a villain, a friend, or a foe?  All is revealed, including the ultimate fate of all the missing patriotic heroes.  And this climactic finale will determine if a broken country will be healed or if it will be swept into the ash bin of history.  Plus, a brand-new hero is born.

THE LOWDOWN:  Since July 2021, Dynamite Entertainment's marketing department has been providing me with PDF review copies of some of their titles.  One of them is Project Superpowers: Fractured States Volume 1 #5, which is the fifth Project Superpowers comic book that I have read.

Fractured States #5 is the final issue of this superb superhero comic book series.  Writers Ron Marz and Andy Lanning offer a satisfying ending that suggests more to come.  Their finale is a bit surreal, but they give us a powerful new hero to face a malevolent entity with bad intentions for what is left of the United States.