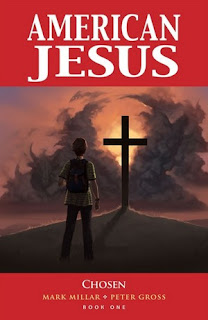 Chosen introduces an ordinary twelve-year-old boy.  Well, Jodie Christianson isn't really normal.  He is the Son of God.  After surviving the freak accident of having an 18-wheel vehicle fall on him, Jodie awakens to discover that he is Jesus Christ.  Well, that explains his parents, Martha and Jonah Christianson's weird and apparently sexless marriage.

Like the original Jesus, Jodie can turn water into wine, cure the blind (or near-sighted), and resurrect pets.  Well, he is not quite like the original.  How much is Jodie different from Christ?  Well, that's the rub, but the newly faithful of Peoria, Illinois are learning to love their boy Christ.  So how will Jodie deal with his destiny, which has been thousands of years in the making?...

THE LOWDOWN:  Netflix/Millarworld sent me a PDF review copy of American Jesus, Vol. 1, and this is the first time I have read the story.  I vaguely remember when the original Chosen miniseries was released, but I seem to remember having a difficult time finding any copies.

Chosen is a quiet comic book, as artist Peter Gross depicts even the most shocking moments in a measured way.  Nothing blows up in your face, but Gross has a way of blowing your mind with disquiet.  With this sense of unease, Gross draws you inside this troubling story.  Gross may be one of the only (if not only) comic book artists to convey via his illustrations and graphical storytelling that a Christ figure is not only supernatural, but also unnatural.  Jeanne McGee's coloring haunts every frame of this story, turning up the sense that something here is wrong.

Mark Millar, being both relentlessly prolific and unrelentingly inventive, is the twenty-first century version of those comic book creators of yesteryear who unwittingly created what would be million-dollar and billion dollar franchises – one after another.  Millar, however, is doing this for himself and his collaborators, and in Chosen, he gets one thing perfectly right.  Saviors and messiahs don't build a following on faith, but on what they can do for their followers.  Nowhere would that be more true than in America.  Every time, Jodie Christianson does something miraculous, the size of his flock multiplies.  Millar's script is almost matter of fact in this, and letterer Cory Petit paces out the wrongness of this scenario, helping to build the sense of trouble.

Thoughtfully conceived and confidently executed, American Jesus Vol. 1 is another example of how determined Mark Millar is to entertain, enthrall, and thrill his readers.  In Peter Gross, he has an equally skilled and determined storyteller.

I READS YOU RECOMMENDS:  Fans of Mark Millar's comic books will want to read American Jesus.

[This volume includes an introduction by actor and filmmaker Simon Pegg; an “Afterword” by Brother Richard Hendrick; “The Gospel According to Millar and Gross: Occult Symbols and Hidden Meanings,” a conversation between Millar and Gross; and “From Script to Art with Peter Gross.”]

Posted by Leroy Douresseaux at 5:00 AM