Comics Review: "THE MAGIC ORDER 3 #4" is Beastin' on Other Comic Books 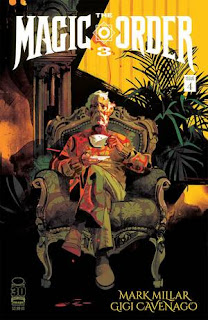 The Magic Order was a six-issue comic book miniseries written by Mark Millar and drawn by Olivier Coipel.  Published in 2018-19, The Magic Order focuses on the sorcerers, magicians, and wizards – in particularly the Moonstone family – who live ordinary lives by day, but protect humanity from darkness and monsters of impossible sizes by night.  A second six-issue miniseries, The Magic Order 2 (2021-22), was recently published.

The Magic Order 3 introduces the Asian chapter of the The Magic Order.  A six-issue miniseries, this third installment is written by Millar; drawn by Gigi Cavenago; colored by Valentina Napolitano; and lettered by Clem Robins.  The series finds Cordelia Moonstone focusing her attention on the Asian chapter's Sammy Liu and his impossible wealth, as the ghosts of an old conflict stir.

The Magic Order 3 #4 opens in Moonstone Castle, the place where a story 500 years in the making is about to be … made.  Meanwhile, Sasha Sanchez (“the Babysitter”) and Rosetta “Rosie” Moonstone begin their adventures in learning magic via a comic book.  Sasha may be one of the most experienced wizards in The Magic Order, but are his misgivings about Rosie correct?  And will he act on them based on nothing more than his hunch?

Plus, who is “the Wizard King of Kolthur?” And why is that a thing?

THE LOWDOWN:  My favorite Mark Millar Netflix creation is The Magic Order.  It always surprises me, but I wonder if that can always be true.  Well...

I could tell you how fabulous The Magic Order 3 #4 is, which it indeed is.  I'd rather tell you about the comic within the comic book.  It is the surprise of surprises in this series... thus far.

In order to depict the adventures of Sasha and Rosie, Mark and Gigi create their own homage to the horror comics of the late cartoonist and comic book writer-artist, Alex Toth (1982-2006).  Toth produced notable genre short stories for Warren Publications (especially in the magazine, Creepy) and DC Comics, from the mid-1960 throughout the 1970s.  Gigi is pitch-perfect with art that could pass for Toth's work, which isn't easy.  Only Toth's most skilled admirers and acolytes can mimic his style, fewer still his unique brand of storytelling.

Millar and Cavenago have done it again.  We don't deserve such consistent excellence, but they give it to us – real, real good – with every issue.  I'm waiting for The Magic Order 3 to fall off that pedestal, but apparently that spell is not in any book.  I super-freakin' highly recommend The Magic Order 3, dear readers.

Posted by Leroy Douresseaux at 2:53 PM