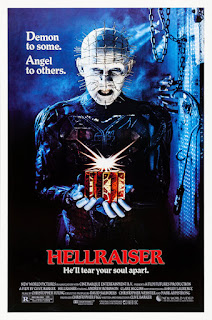 Hellraiser is a 1987 British supernatural horror film written and directed by Clive Barker.  The film is an adaptation of Barker's 1986 novella, “The Hellbound Heart,” which was first published in the third volume in Dark Harvest's Night Visions anthology series.  This movie also launched the Hellraiser film series, which is currently comprised of eleven films, including an upcoming reboot film, entitled Hellraiser, to be streamed on Hulu.  The first Hellraiser movie focuses on a daughter, a father, his second wife, and his brother (who was his wife's lover), and a group of sadomasochistic beings known as the “Cenobites.”

Hellraiser introduces Frank Cotton (Sean Chapman), who searches the world for the greatest pleasures.  His travels take him to Morocco where he buys a strange puzzle box.  In the empty attic of his late parents' home, Frank solves the puzzle and opens the box.  From the box, hooked chains emerge and begin to tear Frank apart because he has fallen into the clutches of a group of extra-dimensional, sadomasochistic beings called the Cenobites.  Demons to some and angels to others, they offer the greatest pleasure … but also the greatest pain.

Some time afterward, Frank's brother, Larry Cotton (Andrew Robinson), moves into the house in a bid to rebuild his strained relationship with his second wife, Julia (Clare Higgins).  Larry's adult daughter, Kirsty (Ashley Laurence), decides to get a place of her own.  Larry is also unaware that shortly before they were married, Julia had a torrid affair with Frank.

While moving furniture into the house, Larry has an accident that leaves blood dripped onto the attic floor.  Beneath that floor are the desiccated remains of Frank, and Larry's blood begins to revive the tissue.  Soon, Frank has returned as a skinless corpse that is soon found by Julia.  In order to revive Frank, Julia begins luring men into the attic.  Julia and Frank's activities have not gone unnoticed and the puzzle box is still around.  And so are the Cenobites.

I first saw Hellraiser when it played at a local theater; my memory says 1988.  For me it was an unforgettable cinematic experience.  I saw it several times over the following years, but I have not watched it in well over two decades.  Seeing it again, I was surprised at how much of it I actually remembered correctly, which is not always the case when I haven't seen a movie in time that can be measured in decades.

Christopher Young's score is as great as I remembered it to be.  Bold and shamelessly intrusive, it is one of the best musical scores for a horror film that I have ever heard.  The make-up and costumes, especially the former, are still amazing and still seem imaginative, although much of it has been copied and replicated countless times since the original release of Hellraiser.  It is a shame that the committee that oversees the “best make-up” category of the Academy Awards isn't a bit more adventurous and imaginative in their choices.  Hellraiser deserved an Oscar nod for its make-up effects.

I like the performances.  When I see American actor Andrew Robinson on some television series, he usually looks as if he just killed someone, but here, he is convincing as Larry Cotton, loving father and determined spouse.  Claire Higgins looks as if she has a stick up her ass, but it serves her imperious ice queen character, Julia, quite well.  Sean Chapman is half-and-half as Frank, but Oliver Smith who plays the “monster version” of Frank, is excellent.  The best actor in this film, however, is Ashley Laurence, who comes across as genuine in the role of loving daughter and “final girl.”  I think the Hellraiser film franchise became low rent over time because she did not stick around past the second film in the series, Hellbound: Hellraiser II.

For me, Hellraiser works.  By the time I first saw it, I had read several of Clive Barker's short fiction via the American release of his Books of Blood short story collections.  I was familiar with his brand of horror and dark horror, which was deeply imaginative in terms of plot, setting, and characters and also in its depictions of violence.  Clive Barker is different, and so is his film, Hellraiser.  It is a viewing and storytelling experience like no other.  And almost four decades later, Hellraiser can still tear your soul apart, dear readers.