Comics Review: "PANTHA Volume 2 #5" is in the Endgame 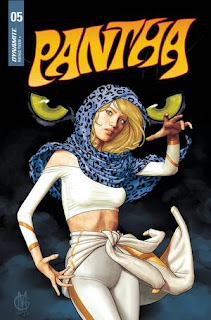 A Dynamite Entertainment, Pantha first appeared in Vampirella #30 (cover date: January 1974).  She is an ancient Egyptian queen who was cursed by the goddess of war and rage, Sekhmet, because of the murders she committed.  Pantha must walk the world forever, trapped between the forms of human and panther.  She will never know home or peace, burdened by the fury of a goddess and the rage of the innocents she ordered slain.

Pantha, like Vampirella, is now belongs to Dynamite Entertainment, which gave the character her own six-issue miniseries in 2012.  Pantha returns in a new comic book series, entitled Pantha Volume 2.  It is written by Thomas Sniegoski and Jeannine Acheson; drawn by Igor Lima and Daniel Maine; colored by Adriano Augusto; and lettered by Dezi Sienty, Carlos  M. Mangual, and Taylor Esposito.  In this new series, Pantha/Maatkar Samira must save the Egyptian pantheon from Ta-Nakht, a mysterious adversary that is older than the gods and wants the gods' power.

Pantha Volume 2 #5 (“Dieties & Death!”) opens beneath the remains of Chernobyl.  There, an epic battle is about to begin.  The primordial god, Atum, will meet his end at the hands of his original creation, the so-called god-eater, Ta-Nakht.  And the father will be the food for his creation.

After millennia of waiting and planning, everything is in place for Ta-Nakht to fulfill its nefarious destiny.  Captured by the god-eater, Pantha, Nick Heart (1960s crooner and current persona of the god, “Ihy”), and the ancient deities known as the Mortalists must somehow free themselves to prevent the birth of a new race of dark deities eager to plunge the world into shadow.  The war against the old gods has begun, and the fate of humanity will depend on Samira, an Egyptian queen cursed to become the most savage of beasts!  Darian Blackwood (Set) and his Blackwood Munitions guest star.

THE LOWDOWN:  Since July 2021, Dynamite Entertainment's marketing department has been providing me with PDF review copies of some of their titles.  One of them is Pantha Volume 2 #5, which is only the fifth Pantha comic book that I have read.

Unfortunately, Pantha Volume 2 #5 brings the series to an end.  Writers Thomas Sniegoski and Jeannine Acheson gave readers a wonderful dark fantasy-thriller full of eccentric heroes and monstrous adversaries.  The series is action-packed with intense battles that sees the villains killing the heroes. Keeping the heroes with their backs against the wall, the writers amped up the conflict and sense of impending doom.

The series main artist, Igor Lima, did not draw this final issue, but Daniel Maine ably fills in with depictions of extreme battle violence.  Maine's storytelling also conveys hope for Pantha's ongoing battle … even if there may not be hope for another Pantha series in the immediate future.

I'll repeat what I said in my reviews of the first four issues.  Don't walk.  Don't run.  Drive like a maniac (without causing an automobile accident) to your local comic shop and get Pantha Volume 2 #5 or, hopefully, a trade paperback collection.