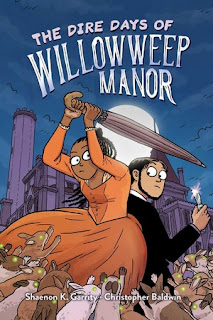 Demographic: Ages 12-up; Grades 7 and up

Available in hardcover and eBook editions

The Dire Days of Willowweep Manor is a 2021 full-color, original graphic novel written by Shaenon Garrity and drawn by Christopher Baldwin.  It has been released in both hardcover and paperback editions.  [My review is based on the paperback.]  The story focuses on a teenage girl who is swept up in a strange new universe and must save it from an all-consuming evil in order to return to her home.

One dark and stormy night, Haley is walking home with an armful of books.  She is thinking ahead of a glorious night of reading, but while crossing a bridge, she sees a stranger drowning in the river below.  Sensing that her moment to be a heroine has arrived, Haley leaps into the water to rescue the stranger.  Exhausted from the effort to save the man, who seems rather ungrateful, Haley later awakens on the shores of a placed called Willowweep.

The place certainly looks like the setting of one of her favorite Gothic romance books.  There is a stately manor (Willowweep Manor) that happens to employ a sinister housekeeper (Wilhelmina).  There are three brothers: brooding Laurence, the eldest; daffy Cuthbert, the youngest; and middle brother, Montague, the one Haley rescued.  Willowweep even has a ghost, Cecily, who seems to know a lot about the place.

Willowweep, neither the land nor the manor, is not what it seems.  The Gothic romantic exteriors and trappings hide what it really is and the fact that a force of great evil is set on destroying Willowweep.  Could the same fate that brought Haley to this place make her the heroine Willowweep needs?

THE LOWDOWN:  I could call The Dire Days of Willowweep Manor clever, which it certainly is, but that would be shallow.  I like that the heroine is an African-American teenage girl, but that does not play a part in narrative.  Haley's skin color is happily never a point of interest with the other characters.

The Dire Days of Willowweep Manor seems like an exercise in creative storytelling.  It is as if writer Shaenon K. Garrity starting imagining this scenario and never stopped being ingenious and inventive.  Every page is a surprise, and the narrative moves in unexpected ways, as does the lead character.  By the end of the story, Haley has changed.  She is still a teen girl, but now she is more open to the possibilities of what she can do, what she can be, and what she can expect from the things that she enjoys.

Artist Christopher Baldwin brings Garrity's delightful tale to life as a sweeping epic.  Baldwin builds this world and invites the readers into its nooks and crannies.  He encourages us to look behind the curtain, to examine the walls, and to push past borders into other places and dimensions.  Without forgetting that Haley is the lead, Baldwin also makes the other characters intriguing and attractive, the better to play off the heroine.

The Dire Days of Willowweep Manor exemplifies how two skilled comic book creators can make the union of their different talents and perspectives appear seamless.  The result is that The Dire Days of Willowweep Manor is a winning read for all ages … and, of course, there should be a sequel.  After reading this delightful Gothic comic romp, dear readers, you will want to follow Haley to other universes, again and again.

I READS YOU RECOMMENDS:  Fans of juvenile science fiction-fantasy, girl heroes, and middle grade graphic novels will want to read The Dire Days of Willowweep Manor.