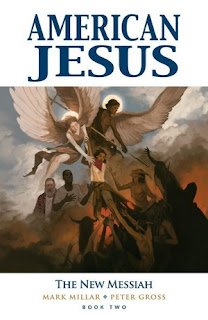 The New Messiah opens in 1970s New York City.  It introduces 14-year-old Luciana Cortez, who has just discovered that she is pregnant – a pregnant teen virgin!  According to the man that appears in her dreams, her child is the Messiah.  Now, Luciana and her 16-year-old boyfriend, Eddie Jones, must flee for their lives as the forces of Satan close in to destroy them.

Eighteen years later, their daughter, rebellious Catalina, is a non-believer, and she thinks that her parents have been brainwashed by the cultists who guard her and her parents in a compound … in Waco, Texas.  Yet there is bloodshed a plenty ahead for young Catalina, and she will be forced to stop refusing to accept her destiny as the savior of mankind.

Sixteen years after they introduced Chosen and its star, Jodie Christianson, Mark Millar and Peter Gross returned with The New Messiah.  Whereas the first volume of American Jesus was something of a horror comedy – droll, witty, and satirical on top of the inherent creepiness, the second volume of American Jesus is a horror-fantasy infused with dramatic aspects.  Darker in tone and more thoughtful, it is a different book for a different “chosen.”

The story of Luciana Cortez and Eddie Jones is essentially a teen romantic drama, although their situation gives it elements of a supernatural teen drama.  Before long, after Catalina is born and approaches adult hood, teen drama is in service of the supernatural situation.  The New Messiah might end as a suspense thriller filled with sequences of edgy action and violence, but on the way, the narrative dances around  from one genre to the next.  Like the first series, The New Messiah challenges our expectations and often trashes them.

It is a talent of Mark Millar to blend genres and sub-genres like the Dust Brothers on the Beastie Boys' album, Paul's Boutique (1989).  Peter Gross conveys the action, drama, and nuances with a deft touch that only the best of veteran comic book artists have.  Gross draws the readers deep into this tale, and Jeanne McGee's colors warm the storytelling space with rich moods and atmosphere.  Letterer Cory Petit keeps the story even as it flies through its surprises and shocking reveals.

I READS YOU RECOMMENDS:  Fans of Mark Millar's comic books will want to read American Jesus.