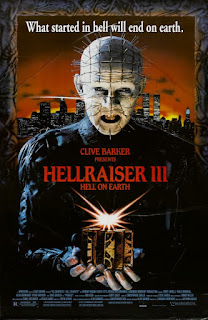 Hellraiser III: Hell on Earth is a 1992 supernatural horror and dark fantasy film directed by Anthony Hickox.  The film is based on characters and concepts taken from the 1986 novella, “The Hellbound Heart,” which was written by Clive Barker, who is the executive producer of this film.  Hell on Earth is also the third film in the Hellraiser film franchise.  Hellraiser III focuses on a young reporter who finds herself taking on the most powerful of the Cenobites.

Hellraiser III: Hell on Earth opens in the wake of the incidents depicted in Hellbound: Hellraiser II.  The Cenobite (demon) called “Pinhead” (Doug Bradley) has been split into two entities:  his former human self, World War I British Army Captain Elliot Spencer (Doug Bradley) and the manifestation of Spencer's id that has taken on the form of Pinhead.

In modern day New York City, J.P. Monroe (Kevin Bernhardt) visits the “Pyramid Gallery,” a creepy art gallery where he buys an intricately carved pillar, “the Pillar of Souls,” which depicts writhing figures and distorted faces etched into its surface.  J.P. installs the pillar at his popular nightclub, “The Boiler Room.” What Monroe does not know is that Pinhead is one of the figures trapped in the pillar, along with one of those puzzle boxes used to summon the Cenobites.

Meanwhile, Joanne “Joey” Summerskill (Terry Farrell), an ambitious young television reporter, is struggling to get respect and attention at the station for which she works, Channel 8.  However, an incident at a local hospital brings her into contact with Terri (Paula Marshall), a young homeless woman who has had a relationship with J.P. Monroe.  As Joey delves deeper into the the hospital incident, she learns that Terri has a puzzle box in her possession.  Now, the box is diving into Joey's dreams.  Trapped in limbo, Elliot Spencer needs Joey's help, because he is depending on her to send Pinhead and his new Cenobites back to Hell.

The third film was the first to be filmed in the United States (specifically North Carolina), and it is more action-oriented than the previous films, including the original, Hellraiser (1987).  Hell on Earth also emphasizes that the Cenobites are denizens of Hell and are demons.  Previously, the Cenobites' “home” was a dimension called “Labyrinth,” and they could be angels or demons – depending upon the point of view.  The third film also has something the first two films did not have – a thumbing soundtrack full of good rock and heavy metal music.

The film has some interesting characters, especially the human characters:  Joey, Terri, and J.P., but it really does not do much with them.  As Joey, Terry Farrell does her best with weak character material, and Kevin Bernhardt adds a jolt to the film as the arrogant womanizer, J.P.  Doug Bradley does his best work in his dual role as Pinhead and as Capt. Elliot Spencer.  If there were ever any doubt, Hellraiser III makes it clear that Pinhead is the true star of this franchise, although Kirsty Cotton (Ashley Laurence), who makes a cameo here, is the film's “other star.”

To this day, Hellraiser III: Hell on Earth is the last film in the series that I have seen.  When I originally saw it, I did not care for it, and it finished the series for me.  Three decades later, I like it, and I really like the new Cenobites.  We are awaiting the debut of the franchise reboot, entitled Hellraiser, in early October 2022 on the streaming service, Hulu.  So, I feel comfortable recommending the heavy metal Hellraiser III: Hell on Earth for those interested in the original movies.

Posted by Leroy Douresseaux at 2:25 PM