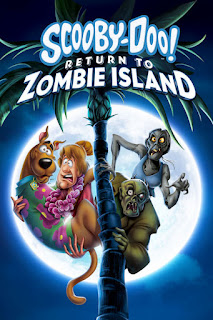 On her television show, legendary horror hostess, Elvira (Cassandra Peterson), announces that Shaggy has won a trip to a tropical island paradise.  Coincidentally, Shaggy is allowed to bring three friends and a dog along.  Because they are supposedly retired from mystery-solving, Shaggy and Scooby-Doo make Fred, Daphne, and Velma promise that they will not solve any more mysteries and will actually try to relax on this vacation.

As they sail on a ferry toward the island, Fred, Daphne, and Velma realize the surroundings are more swamp-like than tropical.  The ferry captain (Dave B. Mitchell) says that zombies inhabit the island, which reminds some of the gang of the last time, years ago, when they visited “Moonscar Island” a.k.a. “Zombie Island,” an island with zombies on it.

When they arrive on this supposed island paradise, two people greet them off the boat, but warn them to get out.  Also, once on the island, a mysterious dark cat creature stalks them.  Even the the hotel is coincidentally named “Moonstar Island Resort.”  Still, no matter how many times they run into something that reminds them of Zombie Island, Shaggy and Scooby make their friends stick to their promise not to try to solve mysteries.  But has that promise put them all in danger of suffering a fate from which they once only narrowly escaped?

Scooby-Doo! Return to Zombie Island, like its predecessor, 1998's Scooby-Doo on Zombie Island, has an strong premise, but clumsy execution delivers an inconsistent film.  Sometimes, the sequel is fun, fast-moving, and comically horrifying, in the tradition of Scooby-Doo TV series and films, but other times, Return to Zombie Island meanders, juggling multiple subplots.  One of those subplots pops up late in the film and involves a movie, “Zombie Teenagers and the Island of Doom.”  At this point, Return to Zombie Island loses credibility, although the film-within-a-film subplot introduces a fun character, the self-absorbed movie director, Alan Smithee, voiced by John Michael Higgins, who delivers a good performance.

Scooby-Doo! Return to Zombie Island is a children's movie, but adults who are fans of this straight-to-video series will want to watch it.  Like me, they may even find some enjoyment in it.

Posted by Leroy Douresseaux at 3:12 PM