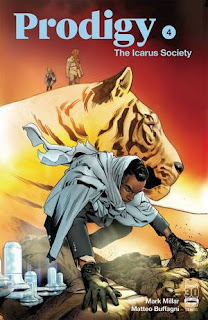 Prodigy: The Icarus Society is a five-issue comic book miniseries produced by writer Mark Millar and artist Matteo Buffagni.  It is a sequel to the 2018-19 six-issue miniseries, Prodigy.  The Prodigy comic books focus on the adventures of the world's smartest man, Edison Crane, who believes that he is the go-to guy when there is a global crisis to solve.  Letterer Clem Robins and colorists Laura Martin and David Curiel complete the sequel's creative team.

Prodigy: The Icarus Society #4 opens in the Himalayas, present day.  Edison accompanies (as a prisoner) Felix Koffka as they hunt for “Shangri-La.”  Accompanying them are Koffka's sneaky wife, Prisha Patil, and his injured employee, Ruby Prentice.

Shangri-La may be a  place from the storybooks, but it has exerted a pull on the world's most evil people for thousands of years.  Now, this paradise will give up its secrets, one of which is that Edison Crane's arrival has been expected.

THE LOWDOWN:  Prodigy, in its two series, has emerged as a spinner of conspiracies, legends, myths, and lore, and has enough of it to rival cable network, The History Channel's “Ancient Aliens” television series.  This fourth issue of The Icarus Society is also the penultimate issue of the series.

Mark Millar always delivers the unexpected.  How does he do it?  Is he a genius like Edison Crane?  Or does it involve the occult?  Seriously, Prodigy: The Icarus Society #4 is full of surprises, and Millar teases an explosive ending.  Prodigy is an adventure into the unknown and the mythical, so Millar seems to anticipate our expectations with the goal of foiling them.  If we are going into the unknown, then, we don't know anything.  We rely on this most brilliant storyteller who always wants to thrill us, the way his favorite comic books did to young Mark.

Artist Matteo Buffagni wants to drag the reader in with his storytelling and wants to transport us into the unknown.  While he refuses to give away secrets, Buffagni entices us with an absorbing mystery.  David Curiel's colors, which usually convey the shadows and dark moods of Buffagni's compositions, are a celebration of light as a legendary location shows itself off in this issue.  Even Clem Robins dials down the lettering for this quiet-before-the-storm entry.

There is no filler in the comic books of Millar and his creative teams.  Prodigy: The Icarus Society could not fly without a superb fourth issue, and superb is what we get.