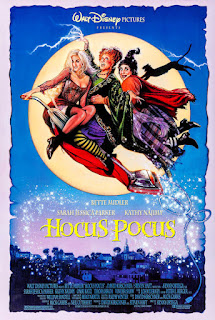 Hocus Pocus is a 1993 fantasy, supernatural comedy, and Halloween film directed by Kenny Ortega.  The film focuses on the new boy in town who ignores local Halloween legend and lore and unwittingly awakens a trio of scheming witches who were executed 300 years earlier.

Hocus Pocus opens on October 31, 1693 (All Hallow's Eve), in Salem, Massachusetts.  A boy named Thackery Binx (Sean Murray) tries to save his little sister, Emily (Amanda Shepherd), from the schemes of Winifred “Winnie” Sanderson (Bette Midler) and her two sisters, Sarah (Sarah Jessica Parker) and Mary (Kathy Najimy), who are all witches.  Thackery fails to save Emily, whose life force is drained in order to make the witch sisters young again.  The witches curse Thackery with eternal life and transform him into a black cat.  However, the vengeful townsfolk capture the Sanderson sisters and hang them, but not before Winifred casts a curse.  According to this curse, the Sanderson sisters will be resurrected during a full moon on All Hallows' Eve if a virgin lights the “Black Flame Candle” in their cottage.  Thackery, now a black cat, decides to guard the cottage in order to keep anyone from bringing the witches back to life.

Three hundred years later, it is October 31, 1993 – Halloween.  Teenager Max Dennison (Omri Katz) is the new kid in Salem, where he has moved from Los Angeles with his sister, Dani (Thora Birch), and their mother (Stephanie Faracy) and father (Charles Rocket).  Max's parents force him to take Dani out trick-or-treating.  One of the houses they visit is the home of Allison (Vinessa Shaw), Max's classmate at Jacob Bailey High School and a beautiful teen girl upon whom he has a crush.

Looking to do something different on Halloween, Max, Allison and Dani visit the former Sanderson cottage, which became a museum before it was shut down.  There, Max, a virgin, lights the Black Flame Candle which, in turn, resurrects, Winnifred, Sarah, and Mary.  Now, the three children join the still alive Thackery the black cat (voice of James Marsden), and William “Billy” Butcherson (Doug Jones) the zombie in a bid to stop the Sanderson sisters from sucking the souls out of all the children of Salem, which would give them eternal youth and immortality.

I remember that Walt Disney did mount a somewhat strong marketing campaign for Hocus Pocus upon it original release in 1993, but the film under-performed at the theatrical box office.  [I won't describe it as a box office bomb, as some do.]  In the 1990s, I worked at a video store and our VHS copy of Hocus Pocus was frequently rented, especially during Halloween.  During the last decade and a half, Hocus Pocus has exploded in a popularity due to repeated shows on “The Disney Channel” and what is now known as “Freeform.”  That popularity resulted in the production of a recently released sequel, Hocus Pocus 2 (via the “Disney+” streaming service).  The arrival of the sequel was the impetus I needed to finally watch the original Hocus Pocus from beginning to end, which I had never done, although I had been putting it off literally for decades.

Having finally seen it, I really like it.  Honestly, despite my best attempts, I can't find anything to dislike about it.  Bette Midler, Sarah Jessica Parker, and Kathy Najimy are a riot as the Sanderson sisters, even if Midler is a little too over the top … here and there.  The sisters' costumes and the Halloween costumes worn by the townsfolk are impressive and imaginative, especially the sisters garb.  The sets and art direction are visually perfect, creating a pop Gothic mood and playful macabre sensibility that are pitch-perfect for a family-oriented Halloween film.

The child actors: Omri Katz as Max, Thora Birch as Dani, and Vinessa Shaw as Allison are quite good, and Max ably carries the film.  I do find the emphasis on Max's virginity to be a bit odd.  Billy the zombie and Thackery the black cat are pitch perfect supporting characters for this film.  Hocus Pocus is an impressive bit of directing on the part of Kenny Ortega and also smooth editing on the part of Peter E. Berger.  Hocus Pocus never stops moving; it has a brisk and appealing pace that can make the viewer lose track of time.  I certainly did.

I highly recommend Hocus Pocus for a family viewing night.  It is not a masterpiece of American cinema, but it is simply as perfect and as effective as it can be.  The critics who initially panned Hocus Pocus were sourpusses, and may still be sourpusses … dead or alive.