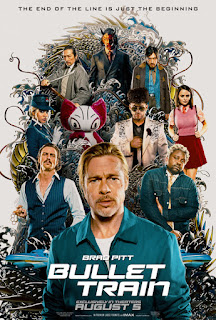 Bullet Train is a 2022 action movie from director David Leitch.  The film is based on the 2010 novel from author Kōtarō Isaka, Maria Beetle (which was titled Bullet Train for its U.S. and U.K. Editions).  Bullet Train the movie takes place aboard a swiftly-moving bullet train where five assassins gradually discover that they have several things in common.

Bullet Train opens in Japan and introduces “Ladybug” (Brad Pitt), an assassin turned “snatch-and-grab man.”  In Tokyo, he enters a bullet train bound for Kyoto.  He is initially wary of accepting this job from his handler, Maria (Sandra Bullock), which involves him retrieving a briefcase that contains ten million dollars.  Also on the train is a young woman known as “Prince” (Joey King); the assassin brothers, “Lemon” (Brian Tyree Henry) and “Tangerine” (Aaron Taylor-Johnson); and the revenge-seeking Yuichi Kimura (Andrew Koji).

They are all passengers on this particular bullet train, directly and indirectly, because of “The Son” (Logan Lerman), the kidnapped son of the Russian-born Yakuza boss known as the “White Death” (Michael Shannon).  Ladybug, who is begrudgingly working this job, believes that it is bringing out the worst of the bad luck that he believes plagues him.  Gradually, he finds himself fighting off an ever-growing gathering of killers and miscreants.  And waiting for everyone at their final stop in Kyoto – at least for those that survive – is an ultimate showdown with the White Death and his hired killers.

Directly or indirectly, Bullet Train is a movie influenced by the films of Oscar-winning filmmaker, Quentin Tarantino.  The dialogue – full of chatter, threats, and banter – is supposed to come across as cool, but it is merely blather from a third or fourth or fifth generation take on a Tarantino screenplay.  The characters are also Tarantino retreads, and so are their actions and inaction.  Still, I must admit that I like some of them, especially Brad Pitt's Ladybug.

So is Bullet Train any good, you might ask?

Well, two-thirds of it is uneven and moves in fits and starts of violence and murder.  I was mostly uninterested, but there are some surprising cameos that captured my interest.  For instance, Zazie Beetz is the assassin, “The Hornet,” and recording artist, Bad Bunny, is the Mexican assassin, “The Wolf.”  Both, however, are barely in the film.  I think they would have improved Bullet Train a good bit had their roles been enlarged.

However, the first 80 or so mediocre minutes of this movie are worth it for the last 40 minutes.  It is as if Bullet Train suddenly explodes in its last act to reveal a much better movie that had been hiding inside the fairly awful movie.  Everything is better, even Brad Pitt, who keeps this movie from being an absolute disaster.  Sometimes, it is worth having a genuine movie star, like a Brad Pitt, star in a genre movie.  The first two-thirds of this movie deserves a grade of “C-” at best, but the last third deserves an “A.”  So I'll average that out to a “B,” and I will recommend Bullet Train because of its last act.  It really is spectacular, and it is a pay off for your patience.

Posted by Leroy Douresseaux at 1:57 PM