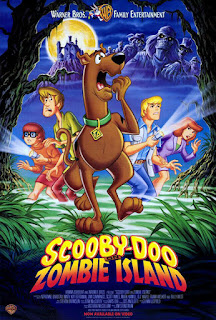 Daphne Blake now has her own television series, “Coast to Coast with Daphne Blake,” in which she investigates claims of supernatural occurrences.  Fred Jones is her cameraman and producer.  Shaggy and Scooby are security guards, and Velma owns a book shop, “Dinkley's Mystery Book Shoppe,” which is also known as “Mystery Inc. Books.”

Daphne decides that she wants to hunt down a real ghost rather than investigating ghosts that turn out to be fakes.  So Fred calls the gang back together, and the reunited Mystery Inc. embarks on a road trip scouting haunted locations across the United States for Daphne's TV show.

That is why they end up in New Orleans, Louisiana, where they meet a curious local, Lena Dupree (Tara Strong).  She tells them that they can find real ghosts at her place of employment, a mansion and hot pepper plantation on Moonscar Island.  Skeptical at first, Fred, Daphne, Velma, Shaggy, and Scooby follow Lena to the island hoping to find a real ghost instead of a villain in a costume.  What they find is more than they expected in a spooky place that might as well be called “Zombie Island.”

I remember that I first heard about Scooby-Doo on Zombie Island probably about a month or so before it was released in September 1998.  It was big news in the world of the American television animation industry and in home entertainment.  I bought a copy for the elementary school age son of a close friend of mine, who was a huge Scooby-Doo fan, then.  [He is now an adult in his late twenties (as of this writing), and I don't know if he still loves Scooby-Doo.]

Scooby-Doo on Zombie Island was billed as the first time that a Scooby-Doo cartoon would find Scooby and Shaggy and company facing real supernatural entities.  The advertising for this straight-to-video (VHS) release declared, “This time, the monsters are real.”  However, as early as a 1980 episode of the “Scooby-Doo and Scrappy-Doo” animated TV series, the stories featured real aliens and a real vampire.

That aside, it is nice to see Scooby-Doo on Zombie Island pit the characters against real ghosts, real zombies, and other real supernatural creatures.  My problem with Scooby-Doo on Zombie Island is that the writers open the movie with some nice character development, but by the time the characters reach Moonscar Island, the story devolves into Scooby and Shaggy running around and screaming or we get tedious scenes of Scooby chasing one or more of the cats that belong to Moonscar mansion's owner, Simone Lenoir (Adrienne Barbeau).

That animation is average to above average, with the best sequences being those with the zombies.  The film's direction presents an inconsistent pace to go with the inconsistent story, so sometimes even a haunted mansion and a zombie island seem like boring places.  Still, I am glad that I finally watched Scooby-Doo on Zombie Island.  I've been putting it off for at least two decades.

I will say that it is an important film because it launched the Scooby-Doo straight-to-video series, of which I am a big fan.  So Scooby-Doo on Zombie Island is a must see for fans of all things Scooby-Doo and Mystery Inc.

Posted by Leroy Douresseaux at 1:50 PM