Review: Idris Elba and the Lion Be Beastin' in "BEAST" 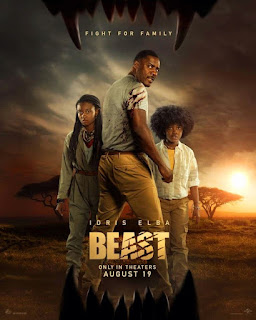 Beast is a 2022 wildlife thriller film from director Baltasar Kormakur.  The film focuses on a widowed father and his two teenage daughters who must fight for survival after they are attacked and stalked by a rogue lion.

Nate was recently widowed when his wife, Amahle, died of cancer, and he is somewhat estranged from his daughters.  Mare is argumentative and rebellious, and Norah is sensitive.  Both girls are bitter about the separation of their father and late mother prior to the latter's death.  Nate hopes that this trip will help him to reconnect with his daughters.

On the second day of the trip, Martin takes the Samuels to the reserve's restricted areas.  Along the way, they encounter an injured man that has apparently been mauled by a lion.  That same lion attacks again, and suddenly, Nate and his daughters are trapped in their vehicle.  Stranded in a remote area inside a damaged vehicle, Nate must find a way to save himself and his daughters from a bloodthirsty rogue lion that does not stop stalking its prey until it they are dead.

First, I wish that I'd seen Beast on a movie theater screen.  Secondly, the mini-melodrama between Nate and his daughters did not interest me.  I found Mare and Norah to be often irritating, and more than once, they made their plight against the lion worse.  Beside that subplot, the film is well written.  There are certainly enough death-defying moments to keep the viewer's attention on the film.

Still, Beast is very well directed and edited.  As soon as Martin, Nate, Mare and Norah leave Martin's home, director Baltasar Kormakur begins turning up the heat.  Before Beast becomes a full-on survival thriller, Kormakur makes it a riveting suspense thriller as the story moves about the reserve, visiting a local pride and moving on to a small village.  That's where the movie explodes, and the rest of the way, Beast is a gripping, edge-of-your-seat thriller.  Honestly, I feel like the film mesmerized me, and I certainly didn't think that I would end up liking it as much as I did … and still do.  I can see myself watching it again.

In addition to having a great monster – the rogue lion, Beast also has a great actor and true movie star, Idris Elba, as its lead.  Elba has that kind of big screen magic that can make the viewer want to vicariously experience a movie through him.  I certainly found myself following his every step, living through the obstacles and threats to Nate Samuels' very life.  Elba also convincingly plays a medical doctor and a loving and patient father, especially to two stubborn daughters.  So Beast has a lion of an actor and movie star to go along with its killer super-lion.  Both will make you feel as if you need to catch your breath, dear readers.