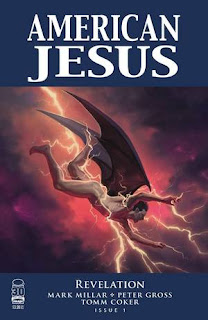 The series concludes in American Jesus: Revelation, a three-issue series written by Millar; drawn by Gross with Tomm Coker; colored by Jeanne McGee with Daniel Freedman; and lettered by Corey Petit.  The series offers the epic conclusion to the greatest story ever told.

American Jesus: Revelation #1 opens before time, with a depiction of the greatest and most infamous coup attempt ever known to the Western world and like-minded parts of it.  In modern times, Jodie Christianson, the Chosen, is now President of the United States.  He is a doting father, telling his two spawn … err … children bedtime tales, a bit of family time before he initiates that terrible attack that soured the hope and promise of the twenty-first century.

Now, the world is falling apart around President Jodie, and he could give a f**k.  Europe is in flames in a war with Russia.  Plagues and lock downs cover the globe.  The financial system is on the brink of collapse.  Jodie's solution is a one world government under the rule of the Antichrist (which is he) and with the digital enslavement of all mankind.

Can even the true savior – the returned Christ – stop Jodie now?  What are her true intentions, anyway?

THE LOWDOWN:  Netflix/Millarworld sent me PDF review copies of American Jesus, Vol. 1 and Vol. 2.  I had not read them until recently, and I needed to do so in preparation for American Jesus: Revelation.  But nothing could prepare me.

Mark Millar is like an incorrigible kid, running through the museum of American exceptionalism and breaking all the bric-à-brac that passes for high art and culture.  A blue-eyed, middle American, small town boy as the Anti-Christ – done.  An Afro-Latina woman as the Savior – done.  Thick bodied, dark-skinned humans as Adam and Eve – he did it.  And Millar gleefully slays the pseudo-sacred cow of 9/11.  Yes, the Scotsman went nine-eleven on 9/11.  And he blends centuries of conspiracy theories – from books, oral history, and the digital age – into a delicious comic book pop confection that I want to devour until I have diabetes.

Yes, Peter Gross, Tomm Coker, Jeanne McGee, Daniel Freedman, and Corey Petit all do stellar work.  But for this first issue, I must testify to the comic book gospel of (Saint) Mark Millar.  All joking aside, Mark and Peter and company must really respect their audience to give us such a fantastic first issue.

Dear readers, you know that not all “superstar” comic book creators go out like Mark and Peter have these past two decades.  But I won't name them; instead, I'll focus on the most excellent American Jesus: Revelation #1.

I READS YOU RECOMMENDS:  Fans of Mark Millar's comic books and of the American Jesus series will want to read American Jesus: Revelation.