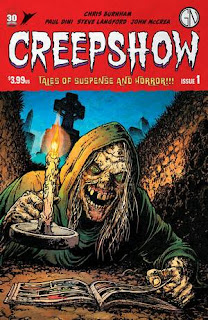 Creepshow is a new horror comic book anthology series from Image Comics.  It is a TV-tie in to the horror anthology television series, “Creepshow,” that currently streams on “Shudder” and later airs on the cable TV network, “AMC.”  Of course, both the comic book and TV series are descendants of the 1982 horror and comedy film, Creepshow, which was directed by the late George A. Romero and written by Stephen King.  Each issue of Creepshow the comic book will feature different creative teams with uniquely horrifying (and sometimes horrible) standalone stories.

Creephow #1 contains two stories.  The first is “Take One,” which is written and drawn by Chris Burnham and colored by Adriano Lucas.  The second story is “Shingo,” which is written by Paul Dini and Stephen Langford; drawn by John McCrea; and colored by Mike Spicer.  Both stories are lettered by the great Pat Brosseau.  Creepshow's horro host, “The Creep,” narrates the story.

THE LOWDOWN:  I'm going to summarize and review each story separately:

“Take One” by Burnham, Lucas, and Brosseau:
It's Halloween night.  Scaredy-cat Phil is wearing a poorly made mummy costume, and he is trick-or-treating with his asshole friends, Nate and Erik.  They come upon the house of the late Mr. Xander, who apparently died the way he treated his neighbors.  Well, although his house is dark, there is a bowl of full-size candy bars on the porch.  “Take One” says the sign in the bowl, so what will happen if Phil, Nate, and Erik help themselves to more?

I love Halloween stories – prose and comics.  That said, “Take One” is an embarrassment.  The punishment does not fit the crime, and the level of violence is neither comic horror nor scary horror.  I have enjoyed some of Burnham's work (Nameless, Secret Wars: E is for Extinction) in the past, but “Take One” is lame horror trying to pass for clever.

On the other hand, I have to admit that Burnham's art and Lucas' colors are nicely atmospheric.  Too bad it's wasted on a wack-ass story.

“Shingo” by Dini & Langford, McCrea, Spicer, and Brosseau:
As the story opens, Sandy Clark is angry, determined, and desperate to find a party entertainer for her daughter, Fiona's birthday party.  It looks as if Fiona's dad, Tom Clark, has also come up short.  Enter Shingo; he (or it) is the party entertainer with the appetite to make any party unforgettable.

After the fumble of “Take One,” I didn't expect much from “Shingo.”  I know that many consider Paul Dini a “legend” for his work on the 1990s animated TV series, “Batman” a.k.a. “Batman: The Animated Series.”  However, I find his comic book work to be hit or miss or miss or mediocre.  I don't know how the collaboration between Dini and Langford worked, but “Shingo” is brilliant.

It is everything that comic horror or horror comedy should be.  It's crazy, wacky, satirical, farcical, droll, and witty and also have an batty monster.  The title boogey is “Shingo,” who is like a gleefully mean-spirited blend of PBS's “Barney,” the purple dinosaur from PBS' long-running “Barney & Friends” TV series, and a mangy “Teletubby” (from the British PBS import TV series, “The Teletubbies”).  The ending and the final-girl-heroes are the double cherries on top.

Artist John McCrea, a master of blending the comic, the violent, and the horrifying, makes this story sing.  Other artists could make this story work, but not as well as McCrea, who also gets some perfect coloring from Mike Spicer.

“Shingo” saves Creepshow #1, and my grade for this issue reflects “Shingo” and not so much “Take One.”  I think “Shingo” has the potential to be a good horror movie in the vein of director Michael Dougherty's 2015 film, Krampus.  And I would be remiss if I didn't say that Pat Brosseau's lettering throughout this issue is outstanding.

I READS YOU RECOMMENDS:  Fans of classic horror comic book anthologies will want to read Creepshow.

[This comic book includes an afterword by Greg Nicotero, the executive producer of Shudder's “Creepshow.”]

Posted by Leroy Douresseaux at 12:25 PM