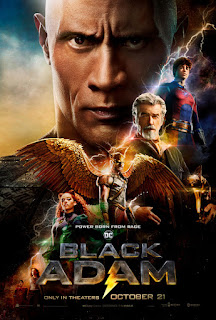 Black Adam is a 2022 superhero and action-fantasy film from director Jaume Collet-Serra.  The film is based on characters created by writers Bill Parker and Otto Binder and artist C.C. Beck originally for defunct publisher, Fawcett Comics, and now owned by DC Comics.  Black Adam the movie focuses on a legendary hero who returns to life after nearly 5000 years, bringing his unique form of justice to his besieged homeland.

Black Adam opens in 2600 BC.  In the city of Kahndaq, there is a legend that the tyrannical king, Anh-Kot (Marwan Kenzari), intended to create an object of dark magic, the Crown of Sabbac, which is known to give the wearer great power.  He enslaves his own people and forces them to dig in the mountains for “Eternium,” the magical crystal Anh-Kot will use to make the crown.  A legendary hero, Teth-Adam (Dwayne Johnson), arises and kills Anh-Kot before the hero himself is buried somewhere in the ruins of the Anh-Kot's castle – so the legends say.

Present day Kahndaq is oppressed by members of the international crime syndicate known as “Intergang.”  They are searching for university professor and resistance fighter, Adrianna Tomaz (Sarah Shahi).  She is trying to locate the Crown of Sabbac, with the help of her brother, Karim (Mohammed Amer), and some of his colleagues.  Ambushed after finding the crown, Adrianna revives Teth-Adam, and although he kills her assailants, the risen hero proves to be something much less than a hero.

Meanwhile, from the United States, the superhero Hawkman/Carter Hall (Aldis Hodge) leads a group of heroes, the Justice Society:  Doctor Fate/Kent Nelson (Pierce Brosnan), Cyclone/Maxine Hunkel (Quintessa Swindell), and newcomer Atom Smasher/Albert “Al” Rothstein (Noah Centineo), into Kahndaq to take Teth-Adam into custody.  While Adrianna and her son, Amon (Bodhi Sabongui), watch, Teth-Adam battles the Justice Society throughout the city.  However, Teth-Adam will be forced to confront the truth about himself and about his past if he and the Justice Society are going to stop a great evil from ruling Kahndaq again.

In case you are wondering, Teth-Adam does not become “Black Adam” until the end of the film.  He is neither hero nor villain.  Black Adam, in the case of this film, is not so much an anti-hero as he is simply Dwayne “The Rock” Johnson.  The movie only exists because Johnson willed it into existence.  Warner Bros. Pictures and DC Films' original plan was apparently to make Black Adam a supporting character/villain in the movie Shazam that was released in 2019.  Johnson wanted more for the character than to be a mere lackey, and truthfully, had he appeared in Shazam as Black Adam, Johnson, as an international movie star with a huge personality, would have dominated the film in ways that probably would have been bad for it.

In the case of Black Adam the movie, it is Johnson's will that holds this film together, otherwise, it would fall apart.  The screenplay is a disaster with a plot that is a patchwork of clumsy sub-plots.  The film's pace is uneven, being a mixture of tedious action sequences and unnecessary fighting.  The characters are either barely likable or are ridiculous.  The kid character, Amon Tomaz, is actually quite nice, but his mother, Adrianna, is really irritating.

Don't get me started on the Justice Society.  As Hawkman, actor Aldis Hodge is so intense that it makes a lot of his performance seem like overacting.  [Actor Michael B. Jordan also has a problem with being too intense.]  Pierce Brosnan is embarrassing as Doctor Fate, but Brosnan's problems could be a poorly written character and crappy dialogue.  The superhero Cyclone is … tragic.  So is Atom Smasher, but actor Noah Centineo delivers Smasher's bad dialogue in a way that sounds funny.

Twice while watching Black Adam, I wanted to walk out of the film, but I was seeing it with a friend.  Black Adam seems much longer than its 124-minute running time.  At one point, I thought the film was over, so I checked my phone and discovered that there was more than a half-hour left.  I can only recommend this films to die hard fans of superhero movies and to fans of Dwayne Johnson.  I could not recommend this film to anyone else.  I'm only giving this film a “C” grade because I am a fan of Johnson and an admirer of what he has built for himself; if not for him, I don't know how much lower I would go.  I am not sure that I could watch Black Adam again, even in bits and pieces when it becomes a cable TV staple.

Posted by Leroy Douresseaux at 3:10 PM