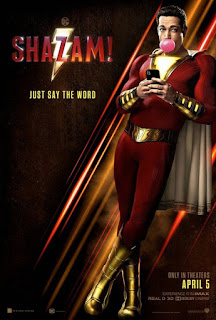 Shazam! is a 2019 superhero and fantasy film from director David F. Sandberg.  The film is based on the DC Comics character now called “Shazam.”  In the movie Shazam!, a 14-year-old foster kid becomes a superhero merely by uttering one magic world, SHAZAM!

Shazam! introduces a mysterious wizard named, Shazam (Djimon Hounsou), who lives in the cave where rests the “Rock of Eternity,” a place that is the home of all magic.  Shazam is looking for a worthy human, who will utter his name and become a champion who also bears the name, Shazam.  After finding so many humans who failed to live up to his standards, Shazam is running out of time.  Now, he hopes that Billy Batson (Asher Angel), a 14-year-old foster kid with a history of petty crime and of running away from foster homes, is his champion.

When Billy shouts SHAZAM!, he becomes an adult (Zachary Levi), a grown man wearing a red superhero costume and possessing incredible powers that Billy cannot imagine.  Now, with the help of his foster brother, Freddie Freeman (Jack Dylan Glazer), Billy will try to learn what powers he has and the extent of those powers.  Meanwhile, Dr. Thaddeus Sivana (Mark Strong), who failed Shazam's test of worthiness when he was a child over four decades ago, now possesses the dark powers against which the wizard fought.  Sivana is determined to discover the identity of the new champion and then, to steal that champion's powers for himself.

Marvel Studios released a film starring Marvel Comics' Captain Marvel on March 8, 2019.  Perhaps, it is a coincidence that in the same year Warner Bros. releases a movie starring Shazam.  And I have to be honest.  I like Marvel's Captain Marvel film, and I like Warner's Shazam just as much.

Shazam is a hugely enjoyable film that is part energetic superhero movie, part charming comedy, and part heartwarming family film.  The superhero action is not as intense as that found in most superhero films.  Much of the superhero action revolves around Zachary Levi's adult hero and Jack Dylan Glazer's Freddie Freeman executing a number of often humorous experiments to learn about Shazam's powers.  The charm comes from the attitude of the film.  Much of Shazam is about teenagers learning not only how to be good people, but also about learning how to be good to the people in their lives.  Shazam probably presents one of the most favorable views of foster parents and of the foster home in recent memory.  And I found that quite heartwarming.  Shazam is at heart an unabashed family film about the joys, comfort, and love of having a family.

One element that makes this film so surprisingly delightful are the performances.  Mark Strong as Dr. Sivana does what he can do so well – be really good at being a really bad guy.  In playing a kid who is suddenly in an adult body, Zachary Levi recalls Tom Hanks' performance in the 1988 film, Big.  Sixteen-year-old Asher Angel shows adult acting chops playing teenage Billy Batson.  Jack Dylan Glazer is uncannily good as Freddie Freeman, and he practically steals every scene in which he is featured.  If there is a children's version of the Oscars, then, Glazer...

Truthfully, every actor who appears in Shazam turns in a good performance or at least tries pretty hard to do so.  So I send a shout out to Faithe Herman in her winning turn as Darley Dudley.

The film is well-written and tightly-directed, both of which is required of comedy films.  I have to give a shout-out to the film editor, Michel Aller, because I think the editing contributed a lot to this film's engaging tone and practically perfect pace.

I think that this review cannot totally convey how surprised – delightfully surprised – I am at how much I like this movie.  I once thought that Shazam! would be a disaster, but I end up having such a good time watching it that I want to see it again.  I even want a sequel.  And I heartily recommend Shazam!, a superhero film for the entire family.