Comics Review: "Nyx #10" is an Excellent Tenth and Final Issue 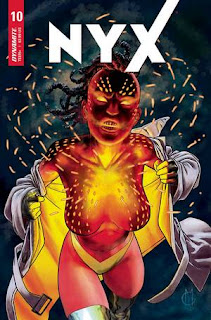 The character now has her own solo comic book series, entitled Nyx.  It is written by Christos Gage; drawn by Marc Borstel; colored by Jordi Escuin Llorach; and lettered by Taylor Esposito.  The series finds Nyx dealing with her emerging human side; with her demon side (which is still powerful and hungry for human life force); with her father, the Mad God Chaos; and with his new children, half-siblings for whom Nyx is responsible.

As Nyx #10 (“You Come at the King ...”) opens, Nyx and her younger half-siblings: Tunrida, Flux, Sammael, and Behemoth, battle their father, the Mad God Chaos.  To put him down, however, one of them will have to take his place...

This is the dramatic conclusion, and the final battle.  It's Nyx and all her surviving siblings against their father!  Which side will win?  Will their be an act of betrayal?  And when all is said and done, will any of them be better off?  Will Nyx be better off?

THE LOWDOWN:  Since July 2021, Dynamite Entertainment's marketing department has been providing me with PDF review copies of some of their titles.  One of them is Nyx #10, the tenth issue of the series that I have read.

For close to a year, I have been saying that Christos Gage is writing a wonderful comic book in Nyx, and that remains true to end of the series.  The characters are always witty and nasty and stubborn, even when they seem doomed.  Gage gives us the dark fantasy version of a family sitcom, but edgier – more HBO than NBC must-watch-TV.

Artist Marc Borstel and colorist Jordi Escuin Llorach told the story in beautiful art, dotted with pin-up shots, cheesecake, and fanservice art.  Letterer Taylor Esposito topped it off with a pound-that-booty soundtrack.  Nyx was good from the first cup to the last drop, but Nyx #10 is the final issue.  I hope Nyx's drunk ass comes around again in a new series.