Comics Review: "SHEENA Queen of the Jungle Volume 2 #9" is a Perfect 10 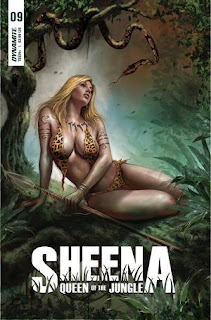 Dynamite began publishing Sheena comics in 2017.  Dynamite's second series is Sheena: Queen of the Jungle, Volume 2.  It is written by Steven E. de Souza; drawn by Jethro Morales, Wil Rio, and Ediano Silva; colored by Dinei Ribeiro; and lettered by Taylor Esposito.  Writer de Souza begins a new series of challenges for Sheena in the story line, “Cenozoic,” which finds Sheena on a mission to save a nature preserve when she and her animal and human companions stumble upon an island out of time.

Sheena: Queen of the Jungle, Volume 2 #9 opens on April 5, 1945, in the log of the captain of the U-3523, the prototype “XXI” U-boat.  It is the greatest and most powerful super-submarine of the German Kriegsmarine.  Captain Karl Visser was to deliver German “wonder weapons” to her Axis partner, Japan, but neither fate nor time would have it.  This is the backstory our heroine confronts.

Sheena's adventure with her animal friends:  Yagua, Chim, and Pete, and with her human companions, Bob Kellerman and Martin Ransome, have reaped the yucky harvest of time travel – the Axis side of World War II.  U-Boats, Nazis, lost worlds, natives, savage tribesmen, dinosaurs, and some kind of local god, it may be more than even a super-fine and highly intelligent jungle queen can handle.

THE LOWDOWN:  Since July 2021, Dynamite Entertainment's marketing department has been providing me with PDF review copies of some of their titles.  One of them is Sheena: Queen of the Jungle Volume 2 #9, which is the ninth Dynamite Sheena comic book that I have read.

Sheena: Queen of the Jungle #9 is the best issue yet of a series that has been quite good.  It is one of my favorite Dynamite titles, and it can be yours, also, dear readers.

Dynamite's current incarnation of Sheena Queen of the Jungle is a reboot by the prolific Hollywood multi-hyphenate, Steven E. de Souza.  He is best known as a screenwriter who writes his own scripts and fixes others, which may still be referred to as being a “script doctor.”  He has fixed Sheena in a way that modernizes the pulp genres and sub-genres that focus on lost worlds, jungle queens, Nazis, master races, etc.  In his career in Hollywood, de Souza's storytelling has had to entertain as many as tens of millions rather than merely appease a few thousand nerds (or less) with fixations on genre trappings and (Lord, help me) “established lore.”  This shiny new Sheena works; de Souza's series is immensely entertaining and has appeal beyond its genres.

Sheena Queen of the Jungle is made doubly entertaining by the artists turning de Souza's scripts into comics.  Ediano Silva, this issue's artist, has a graphic style that recalls the pen and ink illustrations of pulp magazine art, but made practical for the purposes of comic book storytelling.  The art and story pops under Dinei Ribeiro's vivid colors.  Award-winning comic book letterer, Taylor Esposito, offer lettering, captions, and balloons that create a sense of sound.  While reading, I could imagine that I was hearing the joyful noise of issue #9's soundtrack.

It's not too late to join the fun of Sheena Queen of the Jungle Volume 2.  Yes, there is only one issue left, but something this good will certainly get a trade collection... right?