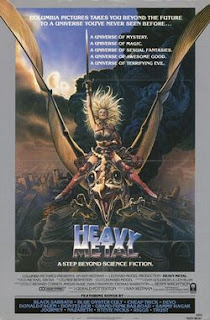 ANIMATION/SCI-FI with elements of action and horror

Originally released in 1981, Heavy Metal is an animated science fiction film named after a magazine of the same title. It is an anthology film made of several animated short films, with each short film connected to the others by an overall storyline. That storyline involves the quest for a mysterious, powerful object.

Heavy Metal the movie begins with an astronaut returning home to his young daughter. He shows her something he brought back, a glowing, green crystalline ball, which kills him as soon as he removes it from a carry case. Calling itself “the sum of all evils,” the green orb begins to tell the terrified daughter a series of stories about how it has influenced people and societies throughout time and space.

The audience learns that the green orb is called the Loc-Nar and also watches as people try to control it or as it controls people. A sweeping story of the battle of good against evil is told through this anthology that follows several characters over 8 short films. These include Harry Canyon, a cabbie in futuristic New York City. There is Dan, a nerdy teenager. The Loc-Nar transforms Dan into Den, a muscular barbarian (with a huge “dork”), and transports him to the world of Neverwhere. The final short film focuses on Taarna, a beautiful warrior woman who takes on a band of vicious, murderous men and monsters created by the Loc-Nar.

As an animated film, Heavy Metal is a wonder. Sure, the character animation in a few of the short films is awkward, but it is quite good in others, like the Taarna story. Heavy Metal’s designers and animators grabbed the art and graphics from Heavy Metal magazine and brought them to motion picture life with vivid, stirring animation. I cannot call Heavy Metal great, but this visually striking animated film is one-of-a-kind and an absolute delight to watch – especially if you are a comic book or science fiction fan.

Posted by Leroy Douresseaux at 1:46 PM