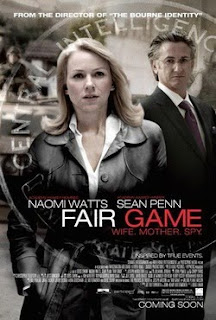 DRAMA with elements of a thriller

Valerie Plame Wilson and her husband Ambassador Joseph C. Wilson are real people. About four months after the beginning of the Iraq War, Wilson wrote an op-ed piece for The New York Times entitled, “What I Didn’t Find in Africa,” which disputed claims President George W. Bush made during the run up to the invasion of Iraq.

In retaliation, operatives within the Bush administration leaked sensitive information to Bush-friendly press toadies. This sensitive information was the disclosure of Valerie Plame’s identity as a United States CIA Operations Officer. This revelation and the subsequent scandal the revelation caused came to be known as “Plamegate” or “the Valerie Plame Affair.” Eventually, the Wilsons would detail their ordeal and experiences in two books, Valerie Plame’s Fair Game: My Life as a Spy, My Betrayal by the White House and Joseph Wilson’s The Politics of Truth: Inside the Lies that Led to War and Betrayed My Wife's CIA Identity: A Diplomat's Memoir.

The 2010 film, Fair Game, directed by Doug Liman (The Bourne Identity), is a fictional account of the “Plame affair.” The film’s screenplay is based on both Wilson and Plame’s books.

As the movie begins, Valerie Plame (Naomi Watts) travels around the world for the CIA, pursing nuclear nonproliferation – stopping the spread of nuclear weapons and the material and technology used to make them. Soon, her work gets caught up in the White House’s need to prove that President of Iraq Sadam Hussein is pursuing the creation of WMDs (weapons of mass destruction). After the United States leads an invasion of Iraq, Plame’s husband, Ambassador Joseph Wilson (Sean Penn), writes an op-ed column for the New York Times, in which he accuses the administration of President George W. Bush of misleading the public to justify invading Iraq. In retaliation, figures inside the administration leak Plame’s status as an agency operative for the CIA. Now, not only is Plame’s career in jeopardy, but also the safety of her family and her marriage to Wilson.

Fair Game seems to want to be either a human drama or a political suspense thriller or both. It is muddled, sometimes being a character drama inside a political thriller and other times being a thriller inside drama. It also has elements of a war movie and of a political melodrama. The narrative struggles to balance a desire to be a fact-based biopic (because this film is about real people and is based on very recent events) and the need to be a taut political thriller, because of box office considerations. Fair Game ends up being all over the place.

This movie is not bad. Actually, some of it is good (Naomi Watts), and some of it is average (Sean Penn’s performance) to a little above average (the last half hour of the movie). Fair Game is not standout material, and if the “Plame affair” is going to be a movie, then that movie needs to be standout – in my (not really) humble opinion. Fair Game is ordinary rather than prominent, but it has its moments.