"The Town" Brings Heat to Boston 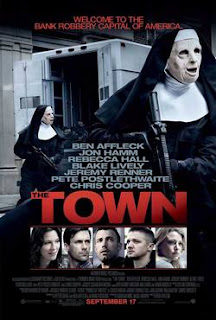 The Town is a 2010 crime drama directed by Ben Affleck, who also stars in the film and is one of the writers. Based upon the novel, Prince of Thieves by Chuck Hogan, The Town focuses on a career bank robber who falls in love with a bank manager he takes hostage after a heist.

After robbing a bank, they take bank manager, Claire Kessey (Rebecca Hall), hostage. Even after releasing her, Doug stalks Claire to learn how much she is cooperating with the FBI. Meanwhile, Fergus “Fergie” Colm (Pete Postlethwaite), the local crime boss known as “the Florist,” pushes MacRay and his crew to attempt ever more dangerous and complex heists. MacRay is ready to leave Charlestown, but the weight of his obligations to best friend, Jem, seems to hold him in a life of crime. As MacRay prepares for his most dangerous heist ever, FBI Special Agent Adam Frawley (Jon Hamm) gets closer to discovering MacRay and his team.

Ben Affleck’s The Town seems like a Boston version of Michael Mann’s 1995 crime classic, Heat, which is about Los Angeles-based bank robbers. Several times while watching The Town, I thought of Heat. I also think that The Town isn’t as good as Affleck’s previous directorial effort, the excellent Gone Baby Gone.

The Town is still good, but I can’t imagine that is will ever be called a crime classic, in spite of what seems like a tremendous effort on Affleck’s part to make a great crime drama. Everything is well-done, but the character drama seems a little flat. Only when the narrative gets into the action set pieces (the before, during, and after the robberies) does The Town spring to mad life. In these instances, Affleck is strongest and most sure of his craft, whereas in the character moments, he and his narrative drift a little.

There are two exceptional things about The Town. First is Jeremy Renner as the volatile Jem. Crime films thrive on great supporting performances, and The Town has one in Renner. He makes Jem seem so complete, whole, and real that you might forget that Jem is just a fictional character; Renner lights up the screen whenever Jem appears. Blake Lively also delivers a strong turn as Jem’s troubled sister, Krista Coughlin, an unstable single mother and addict who is MacRay’s former girlfriend. Lively makes Krista good enough to warrant much more screen time that the character actually gets.

Like Heat, The Town has a shootout scene that tears the roof off the mutha. That is enough to make me overlook the film’s deficiencies, but as good as it is, The Town could have been so much more.

2011 Golden Globes: 1 nomination: “Best Performance by an Actor in a Supporting Role in a Motion Picture” (Jeremy Renner)

Posted by Leroy Douresseaux at 1:53 PM