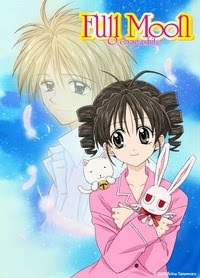 VIZ MEDIA LAUNCHES THE ANIME SERIES FULL MOON ON HULU AND VIZANIME.COM
Episodes 1-5 Will Stream For FREE With New Episodes Available Every Friday!
VIZ Media has announced the launch of the shojo-inspired anime series FULL MOON today on VIZAnime.com, the company’s premiere website for anime, as well as through the streaming content provider HULU (http://www.hulu.com/).
VIZAnime and HULU will stream episodes 1-5 (subtitled) of the series for FREE. Two new FULL MOON episodes will be uploaded and also available to stream for FREE each Friday!

FULL MOON (Rated ‘T’ for Teens) is a bittersweet tale of puppy love, tragedy, and aspirations of pop-star fame. The anime series is based on a popular shojo manga (also published by VIZ Media) created by Arina Tanemura. In the series, Mitsuki Koyama dreams of becoming a singer, but a malignant tumor in her throat prevents her from fulfilling her wish. One day two Spirits of Death named Takuto and Meroko appear and tell her she only has one year left to live! But the Spirits can grant Mitsuki a temporary reprieve from her illness and give her singing career a magical push start. Will Mitsuki be able to fulfill her dreams with Takuto and Meroko's help? Follow Mitsuki on her journey to become a singer in this exciting new series.

To learn more about the FULL MOON anime and manga series, please visit VIZAnime.com or ShojoBeat.com.

Posted by Leroy Douresseaux at 7:34 PM