"The Visitor" Brings a Love of People 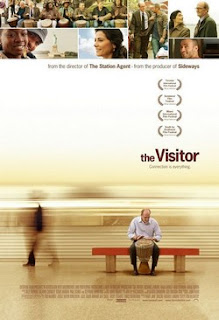 The Visitor is a 2008 drama written and directed by Thomas McCarthy. The film focuses on a lonely college professor whose life changes when he becomes wrapped up in the lives of a trio of undocumented immigrants. This forces him to deal with issues of immigration in post 9/11 New York City.

Widower Walter Vale (Richard Jenkins) is an economics professor living and working in Connecticut. He not only lives a solitary existence, but he is also somewhat estranged from this colleagues. Walter reluctantly travels to New York City to deliver a paper at a conference, but when he arrives at an apartment he maintains in Manhattan, he is surprised to find a young unmarried couple squatting there. They are Tarek Khalil (Haaz Sleiman), a Palestinian-Syrian who plays the djembe (a type of drum), and his girlfriend, Zainab (Danai Gurira), a designer of ethnic jewelry from Senegal.

Walter learns that Tarek and Zainab are illegal immigrants, but he lets them stay in his apartment while they look for another place to live. He develops a friendship with them, but that friendship is tested when Tarek is arrested and sent to a detention center in Queens for illegal immigrants. Tarek’s mother, Mouna (Hiam Abbass), comes to NYC, and Walter also bonds with her as they try to keep Tarek from being deported back to Syria.

Much of The Visitor is sad and melancholy, and Walter Vale’s loneliness and grief permeate this film. This is, however, not a bad thing because as Walter bounds with his new immigrant friends, we slowly, but gradually see glimpses of the happiness he once had. And it’s a pretty thing. Movies about people connecting and coming together can be beautiful, and this humanist tale finds joy and light even in disappointment and heartbreak.

Good performances abound, but, of course, Richard Jenkins, who earned an Oscar nod for his turn as Walter, is the standout. Jenkins augments the wonderful everyman quality he brings to his work with subtle expressions which turn Walter into a conundrum that viewers will want to unravel and The Visitor a movie they will want to see.

Posted by Leroy Douresseaux at 11:26 AM