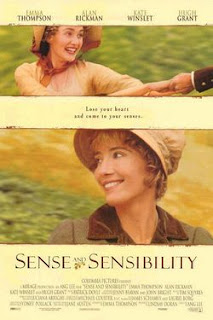 Elinor Dashwood (Emma Thompson) and her romantically inclined sister, Marianne (Kate Winslet), search for marriage amid 19th century etiquette, ethics, and class. Their troubles begin when their father, Mr. Dashwood (Tom Wilkinson), dies, but by law, their half-brother, John Dashwood (James Fleet), from Mr. Dashwood’s first marriage, inherits the country estate in which the sisters live with their mother, Mrs. Dashwood (Gemma Jones), and younger sister, Margaret (Emilie François). Although he has a home in London, John wants the estate for him and his wife, Fanny (Harriet Walter). Shortly after John and Fanny arrive, they get a visit from Edward Ferrars (Hugh Grant), Fanny’s older brother. Elinor strikes up a intimate friendship with the aspiring clergyman, but they must part when Elinor and her family have to vacate the estate to John.

The Dashwoods find a small cottage belonging to a distant relative, Sir John Middleton (Robert Hardy), who lives nearby with his mother-in-law, the very friendly, but prying Mrs. Jennings (Elizabeth Spriggs). It is at their new home where Marianne charms two suitors – the staid Colonel Brandon (Alan Rickman) and the lively and vigorous, John Willoughby (Greg Wise). Marianne prefers the dashing Willoughby over the older Col. Brandon. Meanwhile, Elinor braves the choppy straights of a circuitous courtship with Edward, whose heart has been promised many years prior to another young woman. However, the Dashwoods’ lack of a fortune affects Elinor and Marianne’s ability to find suitable husbands among their social set, so the sisters face heartbreak and triumphant as dark and old secrets are revealed.

Sense and Sensibility is an excellent and splendidly produced costume drama. It is better than most 19th century period dramas produced for film or television (British TV, in particular), although I wouldn’t put it up with the Merchant/Ivory production, Howard’s End. As usual, the technical aspects of the film are good, in particular the costumes and makeup. The sets and locations are a little more grounded in reality than is normal for a 19th century English period piece. This movie isn’t all pristine chambers and lavishly furnished estates. The characters deal with living in poorly heated homes, dirt and dust, and horse manure in the streets.

Critics and fans were shocked that a Chinese director, Ang Lee (up until that time not well known except to art house fans), could direct a British costume drama. However, he simply does, and brings fresh touches to the genre. The film is as natural and as passionate as it is refined and aloof. There is an emotional edge that makes the film engage the audience more than costume dramas normally do. The laughs are heartier; the snobbery is more savage and hurtful; the disappointment more bitter; and the romance more urgent – this is Ang’s touch. One can see that Elinor (expertly played by Emma Thompson, who won an Oscar for adapting Jane Austen’s novel) is as hearty and as resolute as she is reserved. The film’s best performance comes from Kate Winslet, who brings a raw insistence to her pursuit of her man; she’s like a real teenage girl.

The movie’s veracity is the cherry on top that makes Sense and Sensibility a memorable and exceptional costume drama.

Posted by Leroy Douresseaux at 11:23 AM