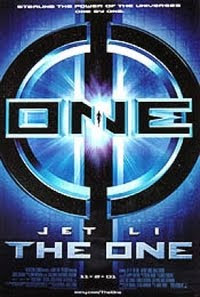 Longtime television writer (“X-Files,” “Millennium,” “Space: Above and Beyond”), James Wong begins his sci-fi, action-adventure movie, The One on an alternate earth where Al Gore is President of the United States (which elicited some delighted clapping from the audience with whom I saw the film). Within minutes of that opening, an unbelievable fast and powerful villain has killed a convict who looks exactly like him. After a protracted chase, two armed men Roedecker (Delroy Lindo) and Funsch (Jason Stratham), apprehend the super criminal.

We then learn that he is Yulaw (Jet Li), a former cop like Roedecker and Funsch, who has been killing alternate versions of himself. The universe is actually a multiverse, several universes instead of one. Yulaw finds his other universe opposites and kills them, thereby absorbing some of their energies. When he kills the last one, number 124, he may become like a god.

Cut to “our” world, Yulaw’s earth-twin, number 124, is a sheriff’s deputy named Gabriel (Jet Li again) happily married to his soul mate T.K. (Carla Gugino). When Yulaw intrudes upon Gabriel’s world, he finds that Gabriel has also absorbed the power of the other 123 versions of himself that Yulaw killed. Confused and unsure of Funsch as an ally, Gabriel must stop Yulaw without killing him lest Gabriel himself become a god and endanger all of existence.

When one views a Jet Li movie, one hopes to see the man who moves like a dance artist; in his body, the martial arts are indeed a performance art, and gymnastics are a fatal, beautiful craft. Like Jackie Chan, his body bubbles with enthusiasm. Both their screen gifts are not in the craft of how an actor uses language, but in emotions, exaggerated facial expressions, and movement. They both recall the film greats from the silent era and the golden age of Hollywood, Buster Keaton and Charlie Chaplin. They do have a major difference.

Whereas Chan is a comedian, Li is hardcore action star. Imagine a pint sized Clint Eastwood who uses his hands and feet rather than a big, phallic pistol. Picture a Bruce Willis hero with the charmed nine lives of a cat that uses Far Eastern methods of self-defense over a pistol. Best of all, filmgoers get a fine heir to the Bruce Lee film hero.

Li, who was the wildcard in Lethal Weapon 4, doesn’t need a great script or director behind him; he is the movie. He gets neither in The One. Wong and Glen Morgan’s script is standard sci-fi claptrap, and Wong is a serviceable director who at least manages to capture dynamic movement of his star. Still, the story does occasionally get in the way of Li’s brilliance. Having to balance the nonsensical, fantastic elements draws the audience’s attention away from Li. Worm holes, black holes, and psuedo physics get in the way. We don’t need the science, but the fiction of this impossible superman played by a gifted screen actor is just what we want.

Delroy Lindo’s (Li’s co-star in Romeo Must Die) enormous talents are usually wasted or ignored in supporting roles, but it’s good to see him, even in a bad part. At least he got this job; it easily could have gone to a white actor. Stratham is an odd piece here as he was in John Carpenter’s Ghosts of Mars. So far he has only really seemed a good fit in Guy Ritchie’s Lock, Stock and Two Smoking Barrels and Snatch, but like Lindo, it’s fun to watch him most anytime.

See The One for its star, and forget the phony plot and sci-fi trappings, watching Li is a privilege.