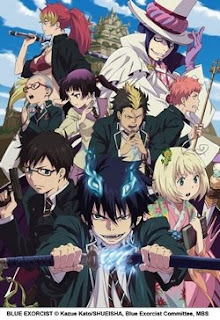 PARANORMAL ANIME ADVENTURE BLUE EXORCIST PREMIERES ON VIZANIME.COM THIS MONTH
New Aniplex Series About A Teenager And His Infernal Destiny Launches In The U.S. Only Days After Japanese Debut
VIZ Media has announced that it will serve as an official distribution partner for Aniplex of America’s domestic debut of the BLUE EXORCIT anime series. VIZ Media will carry the new action series (subtitled) on its VIZAnime website beginning Wednesday, April 20th, just days after its eagerly anticipated debut on Japanese TV on April 17th. New episodes will stream on the site every Wednesday.
In the animated series, Rin, along with his twin brother Yukio Okumura are raised by an eminent priest, Shiro Fujimoto, but one day Rin discovers that their biological father is actually Satan! As the border between “Assiah” (the human world) and “Gehenna” (demon’s world) is intruded upon by evils, Rin vows to become the ultimate exorcist to defeat his own father, Satan. To hone his raw skills, Rin enters True Cross Academy to train with other exorcist candidates. Can Rin fight the demons and keep his infernal bloodline a secret? It won't be easy, especially when drawing his father’s sword releases the demonic power within him!

VIZ Media is the official North American publisher of the BLUE EXORCIST manga (graphic novel) series, created Kazue Kato. Volume 1 is on sale now and is published under the company’s Shonen Jump Advanced imprint. BLUE EXORCIST is rated ‘T+’ for Older Teens and carries an MSRP of $9.99 U.S. / $12.99 CAN.

Manga creator, writer and illustrator Kazue Kato won the prestigious Tezuka Award when she was only 19 for her work, Rabbit And I, published in Japan in Akamaru Jump magazine. Her latest manga series, BLUE EXORCIST, debuted in Jump Square magazine in April of 2009.

Posted by Leroy Douresseaux at 12:51 PM