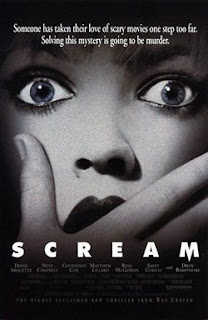 In the GenX/post-GenX thriller Scream, a psychopathic killer stalks a group of teens just like psychos stalk victims in slasher movie. His primary focus is teenage virgin Sidney Prescott (Neve Campbell), and the killings begin near the one-year anniversary of her mother’s death. A tabloid reporter, Gale Weathers (Courtney Cox), who covered sensational murder trial of the alleged killer of Sidney’s mom, is determined to uncover the truth because she believes the wrong man was convicted of killing Mrs. Prescott and that the real killer is still at large. Of course, the mystery surrounding the killer culminates during a raucous teen party held at the obligatory isolated farmhouse. Finding out who survives is as fun as learning who the killer is.

Much has been made of how Scream references the many horror films that preceded it, especially 1980’s slasher flicks, but Scream is simply a great horror film and as much a mystery thriller as it is a scary movie. Maybe that’s because the film is a horror movie for the sake of being a horror movie. Any social commentary the film makes is ancillary, and anything it says about other movies is just the nature of the beast. Just about any horror movie will reflect the others that came before it.

While casting young stars from TV shows popular with teens and twenty-somethings in the mid-90’s was a savvy move on the part of the filmmakers (most 80’s slasher movies cast young unknowns), the two elements of that make Scream great are screenwriter Kevin Williamson and director Wes Craven. Williamson’s script is tight, smart, funny, deft, self-referential, and most of all, creates a solid structure of suspense. The characters are mostly throwaways, but Williamson makes us care about them because the situations he puts them in are so precarious, we’d be cruel not to root for them to escape. For all the artful window dressings, Williamson’s script simply tells a scary story.

Wes Craven is one of the greatest horror film directors of all time having helmed A Nightmare of Elm Street and The Last House on the Left. Scream simply cements his position as a master director of the suspense genre. He turns Williamson’s words into palatable fear. He knows when to make the film outright scary, and when slowly increase the level of suspense and fright. Craven knows when to be funny and silly, and he knows when to deliver the deathblow, but most of all when to leave it all hanging on a thin string.

Scream is a film no slasher fan should go without seeing, and certainly it’s a work not to be missed by admirers and students of horror cinema.