Review: "Bridget Jones: The Edge of Reason" is Better Than the Original (Happy B'day, Renee Zellweger) 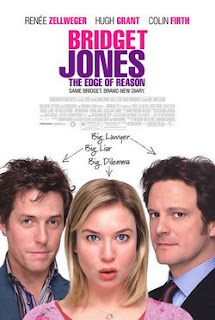 She found her Mr. Right in Mark Darcy (Colin Firth) by the end of Diary, but as Edge begins Bridget discovers that the couple has huge cultural, social, and personality conflicts. Mark is a conservative who has poor people-hating, rich Tory friends. Bridget is full of insecurities, although Mark is supportive and (almost) tolerant of Bridget’s tiny jealousies. However, the trouble comes to a head when Bridget meets Mark’s leggy new intern, Rebecca (Jacinda Barrett). Rebecca is thin, oh-so-young, drop-dead gorgeous, and she always says the right thing at the right time. Fed up with what she perceives as Mark’s cold lack of concern about their future together she dumps him. Just in time, her old flame, old boss, and eternal cad, Daniel Cleaver (Hugh Grant), sweeps in and to become Bridget’s new co-worker. Their television partnership eventually takes them to Thailand in what becomes the worst vacation Bridget ever had. Will Mark come to her rescue… and rescue of their relationship?

Bridget Jones: The Edge of Reason is one of the funniest movies of the year, the funniest movie Ms. Zellweger has done to date, and funnier (though not as romantic) than the original. Ms. Zellweger gives one of the finest comic performances in recent years; it’s part slapstick and part physical comedy (lots of pratfalls). Not only did she have to give near perfect timing on the delivery of her dialogue, but also her facial ticks and mannerisms had to perfectly fit the moment, which they always do in this film.

Colin Firth didn’t bring anything new to the second film, but he didn’t need to change what he did in the original film. His film persona is endearing (even when he plays the bad guy, as he did in Shakespeare in Love); Firth makes Mark Darcy as he must be – perfectly so to explain Bridget’s craziness about their relationship. Hugh Grant is cut from the classic mold of old Hollywood. He’s a star known for “playing himself.” He is however, vastly underrated, because of his skill in slightly modifying the same character (he plays every time) to flawlessly fit each new film in which the character appears. Virtually every classic Hollywood film star from Humphrey Bogart to James Stewart did this, and Grant’s spin on his film persona is another reason Bridget Jones: The Edge of Reason is not only better than the original, but also a standout comedy.