The Prince of Tennis Anime at iTunes 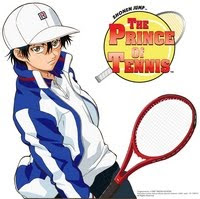 VIZ Media has announced the launch of THE PRINCE OF TENNIS anime series available for Download-to-Rent/Download-to-Own from iTunes® in the U.S. (http://www.itunes.com/) and Canada (http://www.itunes.ca/). Seasons 1-4 contain 50 episodes (dubbed) of the venerable sports drama that will be available in their entirety starting April 18th. As a special promotion, THE PRINCE OF TENNIS Episode 1 will be available for free download from April 18th to May 17th.

THE PRINCE OF TENNIS is based on the smash hit manga (graphic novel) series by Takeshi Konomi that has sold more than 30 million copies in Japan, and is published exclusively in North America by VIZ Media (Rated ‘A’ for All Ages).

THE PRINCE OF TENNIS anime series (rated TV-G) follows the on and off court adventures of Ryoma Echizen, the 12-year-old son of a famous tennis player and a prodigy in his own right. Looking to make a mark, he joins his junior high school tennis team, known as one of the most competitive in Japan. Ryoma is cool and collected, and some might even say he's cocky, but he's got the skills to back up his attitude, with a virtually un-returnable "twist serve,” and quickly defeats numerous upperclassmen to secure himself a first string spot on the team. With talent in his blood and fire in his eyes, he backs up his confidence on the court with amazing skills. Now he has to overcome the older players on his high school team who are dead set against letting him surpass them. To defeat the slippery "Viper" Kaido, the calculating Sadahara Inui, and a host of other opponents, Ryoma will need everything he's gotten from his father and more!

THE PRINCE OF TENNIS is a phenomenon in Japan, where the manga continues to be published and the anime series has drawn rave reviews. Games, related merchandise, and a live action film have also fueled the title’s continued popularity.

For more information on THE PRINCE OF TENNIS, please visit http://www.vizanime.com/.