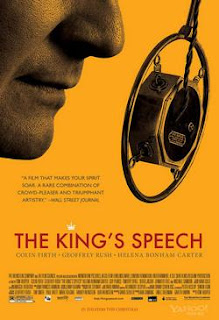 The King’s Speech isn’t just any British historical drama. After all, it won the Academy Award as “Best Picture” of 2010. I don’t think it is as good as some of the British costume or period dramas from Merchant Ivory Productions (like Howard’s End and Remains of the Day) or even Shakespeare in Love (another best picture Oscar winner). However, this film about a king with a stammer and the man who helps him overcome it is a really good movie that I heartily recommend to fans of historical dramas.

Logue’s pioneering treatment helps Albert, and the two men form an unlikely friendship. After Albert’s older brother, David, the Prince of Wales (Guy Pearce), steps down as King, Albert becomes King George VI and relies on Lionel even more. As war with Germany looms, George VI will need Logue’s help to deliver the King’s speech to Great Britain and the British Empire, a radio address that will assure the people’s confidence in their still-new king.

Tom Hooper, the director of The King’s Speech, was primarily known for his work directing for television (including the Emmy-winning, HBO miniseries, John Adams). However, the visual style he uses for The King’s Speech gives the film the grand feel of a historical epic, while simultaneously capturing the intimacy necessary for a character drama. Hooper is aided and abetted by art direction that brings the royal existence of the 1920s and 1930s to vivid life.

As well directed as The King’s Speech is, the core of the movie rests on the performances of Colin Firth and Geoffrey Rush. This movie is essentially the tale of a troubled prince/king who is shown the way to victory by a curmudgeonly wizard, and, in that sense, Firth as the distressed royal and Rush as the stern but doting old mage are triumphant. I have been watching Firth for years, so I know that he is an excellent actor. Still, I almost totally believed that he was the sorely troubled King George VI, fighting a real stammer. What can I say about Rush other than that he is always good, but, as Logue, this is one of those performances that will be marked in his career as a peak in a great body of work.

Helena Bonham Carter is also quite good, making the most of her time on screen and even stealing a few scenes. Firth won an Oscar for his performance here, and Rush and Carter should have also won Oscars, although they did receive nominations. There is much to like about The King’s Speech, but this trio makes the film a classic among British historical dramas.