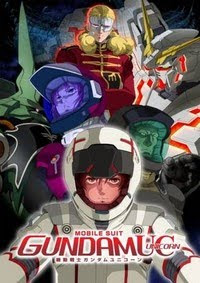 The cinema will present both subtitled and dubbed versions of the series on each day. Tickets for Mobile Suit Gundam UC (Unicorn) are $8.00 for Episode 1 and $10.00 each for Episodes 2 and 3. Special combo tickets are available for $26.00 online or from the NEW PEOPLE box office for all 3 Episodes in any combination over the weekend. Tickets, trailers and more details are available at: http://www.newpeopleworld.com/films

Advance copies of Mobile Suit Gundam UC (Unicorn) on Blu-ray, distributed by Bandai Entertainment, Inc., will also be on sale (on April 2-3 only) for a discounted price in the NEW PEOPLE retail store – ahead of the series’ April 7th general release.

U.C. (Universal Century) 0001…
A New Era is about to begin with the announcement that the settlement of space has commenced. But as the calendar change ceremony is in progress, the space station Laplace, official residence of the Earth Federation prime minister, is shattered by a terrorist bombing.

A young man named Syam, who joined the terrorists because of poverty, is caught in the explosion of Laplace and discovers something amid the wreckage. This is the forbidden box that will later be known as Laplace’s Box. Laplace’s Box is never to be opened. There are few who even know what it is. The secret of the box continues to sleep with Syam...

U.C. 0096…
The manufacturing colony Industrial 7, which is still under construction, floats at Lagrange point 1.

A youth named Banagher Links, who grew up without knowing his father, meets a mysterious girl who has stowed away on a ship bound for Industrial 7. As the white mobile suit Unicorn undergoes repeated tests and becomes the subject of diverse speculations, the hands of time begin to move. Banagher does not yet know that he has been caught up in the conflict surrounding Laplace’s Box.

What is Laplace’s Box?
What secret does it contain?

The hundred-year curse of the Universal Century is about to be resolved.

NEW PEOPLE features the nation’s only movie theatre devoted to Japanese film and anime. The 143-seat subterranean theatre is located inside NEW PEOPLE at 1746 Post Street in San Francisco’s Japantown and features plush seating, digital as well as 35mm projection, and a THX®-certified sound system.


About NEW PEOPLE, Inc.
Based in San Francisco, California, NEW PEOPLE, Inc. (www.newpeopleworld.com) offers the latest films, art, fashion and retail brands from Japan through its unique entertainment destination as well as through licensing and distribution of selective Japanese films. NEW PEOPLE Entertainment (www.newpeopleent.com), a film division of NEW PEOPLE, Inc. strives to offer the most entertaining motion pictures straight from the "Kingdom of Pop" for audiences of all ages, especially the manga and anime generation, in North America. Some titles include DEATH NOTE, GANTZ, KAMIKAZE GIRLS, and THE TASTE OF TEA.

Posted by Leroy Douresseaux at 8:15 AM