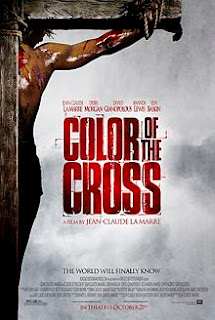 In his film, Color of the Cross, writer/director Jean-Claude La Marre re-imagines Jesus Christ by positing that the founder of Christianity was a black man. Set in Arimathea circa 33 A.D., the film covers the final 48 hours of his life, beginning with Jesus, called Joshua (Jean-Claude La Marre), and his disciples preparing for Passover – what would become known as the Last Supper – and ending with Joshua’s crucifixion. The narrative also examines how Jesus’ Disciples and his family suffered during his last days. The film suggests that Joshua’s crucifixion was perhaps racially motivated because many Jews, including powerful members of the Sanhedrin (Jewish religious authority), would not accept that the Messiah or savior of the Jewish people could be a black Jew.

Jean-Claude La Marre’s Color of the Cross alternates between being profound and unintentionally hilarious. First, La Marre, who plays the lead, doesn’t make for an impressive nor imposing messiah, except for when he plays Joshua/Jesus as getting upset at his followers; then, La Marre quietly smolders with an intensity that might have the recipients of his stares heading for the hills. Other times, La Marre just looks like a doe-eyed kid.

The film finds itself on rare occasions being quiet moving and spiritual, and when Joshua speaks lines that are recognizable as Holy Bible scripture, the entire movie feels like a profound religious enterprise. In those moments when La Marre takes liberty or re-imagines players and Biblical moments, the film more likely than not falls flat on its face. In fact, while Color of the Cross brings up the idea of Christ being a black man (a dark-skinned black man) and also the notion that bigotry played a part in his crucifixion, it handles both matters in such a tepid fashion that any notion of racism playing a part in Joshua/Jesus’ troubles never sticks. It’s like taking the thesis and turning it into an afterthought. Because the whole Jesus-as-black-man is half-hearted, Color of the Cross withers on the vine.

Meanwhile, the solemnity of dealing with matters of Christ saves the film. Color of the Cross lacks the passion of Mel Gibson’s Jesus flick, and it mostly seems like a well-intentioned made for cable religious TV movie. None of the acting, directing, and production values ever stand out, but the score by La Marre and Flexx (Jean Simeus – a rapper, producer, and songwriter) is mostly very good, except for a wonky moment here and there.

Those who aren’t put off by the idea of a black Jesus Christ will find this odd little film ultimately to be an affirmation of Christ as “a uniter, not a divider.”


Color of the Cross

Posted by Leroy Douresseaux at 7:00 AM