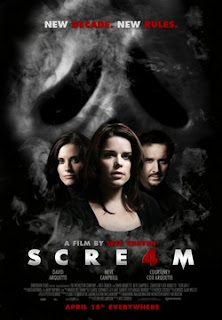 A little over 11 years after Scream 3, Scream 4 hits movie theatre screens in an explosion of blood and guts. However, Scream 4 is not just a sequel. It is also something of a remake of and homage to the original 1996 movie, Scream.

On the 15th anniversary of the Woodsboro massacre (as seen in the original movie), Sidney Prescott (Neve Campbell) returns to Woodsboro, the final stop on the tour to promote her book, Out of Darkness. Sidney discovers that she cannot escape the horrors of her past, because two high school students have just been murdered by the new Ghostface. Sidney also finds herself thrust back into the lives of the only other two people to survive the various Ghostface killers, Sheriff Dwight “Dewey” Riley (David Arquette) and his wife, journalist-turned-novelist, Gail Weathers Riley (Courteney Cox).

Now, Sidney’s young cousin, Jill Roberts (Emma Roberts), and her high school classmates are the targets of the new Ghostface. This new generation of potential victims, however, seems to relish the murderous attention of the infamous killer and hope this latest Ghostface rampage will help bring them fame in the age of social networking. Will they still be excited when they learn that the new murder spree is not like a sequel, but is instead like a reboot? Do they know that Ghostface is playing by new rules? Anyone can die anytime.

As a slasher film, Scream 4 is entertaining. Ghostface remains a terrific horror movie villain, slaughtering his victims to the point that they seem like butchered meat and offal. Neve Campbell, Courteney Cox, and David Arquette are reliable, if not a little a hoary. The new cast is, for the most part, pretty good, but Hayden Panettiere’s saucy Kirby Reed is the only standout. Overall, when Scream 4 plays it straight, it is a better-than-average horror movie.

Director Wes Craven and screenwriter Kevin Williamson continue their efforts to make the Scream franchise self-referential and each installment a horror movie about horror movies. This is where Scream 4, as well as the other sequels, flounders. The original film, for all its hip attitude and pop culture references, was a traditional horror movie, only slicker and with a better script and filmmaking. The original’s charming small town setting was perfect for a horror movie, and the youthful cast was vibrant and cool. The villains behind the Ghostface killer had believable (though crazy) motivation for their murder spree. Scream was a genuine horror flick.

Scream 4 wants to be more than something from the horror movie slasher subgenre. The script makes Scream 4 essentially a remake inside a sequel, and some of the film seems like a middle-aged guy’s rant against Internet celebrity and social media culture. That’s just filler material. It’s time for some fresh faces and ideas. Scream 4 is at its best when it focuses on what it already has that every successful horror franchise needs – a great villain. So if there is a fifth film, hopefully it will feel more like a fresh reboot instead of a tired sequel. Still, Scream 4 offers some bloody good fun.