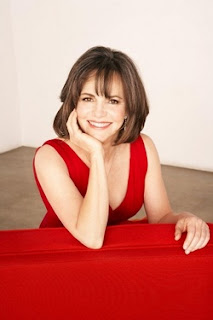 "I'm excited to be working with Sally for the first time,” said Steven Spielberg. “I've admired her films and she has always been my first choice to portray all the fragility and complexity that was Mary Todd Lincoln."

“To have the opportunity to work with Steven Spielberg and Daniel Day-Lewis and to play one of the most complicated and colorful women in American history is simply as good as it gets,” said Sally Field.

Based on the best-selling book, Team of Rivals, by Pulitzer Prize-winning historian Doris Kearns Goodwin, the screenplay has been written by the Pulitzer Prize winner, Tony Award winner, and Academy Award nominated writer Tony Kushner. It will be produced by Kathleen Kennedy and Steven Spielberg.

It is anticipated that the film will focus on the political collision of Lincoln and the powerful men of his cabinet on the road to abolition and the end of the Civil War.

Sally Field is a two-time Academy Award winner as Best Actress in a Leading Role for her roles in “Places in the Heart” and “”Norma Rae.” Field won an Emmy for Outstanding Lead Actress in a Drama or Comedy Special for her role in “Sybil.” She won her second Emmy for her guest starring role on the long-running drama, “E.R.” Her other film credits include “Steel Magnolias,” “Mrs. Doubtfire,” and “Forrest Gump.” Field currently stars in the ABC series “Brothers & Sisters” for which she won an Emmy in 2007.

Doris Kearns Goodwin won her Pulitzer Prize for No Ordinary Time, the story of Franklin and Eleanor Roosevelt and the home front in World War II. Kushner's prize was for his play Angels in America, which later became an Emmy Award-winning television special. He had previously worked with Spielberg on Munich for which he was nominated for an Oscar in the Adapted Screenplay category.

Filming is expected to begin in the fall of 2011 for release in the fourth quarter of 2012 through Disney’s Touchstone distribution label.


About DreamWorks Studios
DreamWorks Studios is a motion picture company formed in 2009 and led by Steven Spielberg and Stacey Snider in partnership with The Reliance Anil Dhirubhai Ambani Group. Upcoming releases include “Cowboys & Aliens,” “The Help,” “Fright Night,” “Real Steel,” and “War Horse.”

Posted by Leroy Douresseaux at 11:52 AM