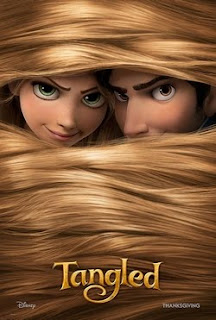 ANIMATION/FANTASY/MUSICAL/COMEDY/FAMILY with elements of an action movie

The 3D animated film Tangled is the 50th full-length animated feature from Walt Disney Animation Studios. Based upon the Brothers Grimm fairy tale, Rapunzel, Tangled is, to date, the most expensive animated film ever made, and the money is well spent. Tangled simply surprised me with how enjoyable and, quite frankly, how wonderful it is.

The story focuses Princess Rapunzel (Mandy Moore), a young woman whose parents are a king and queen, but Rapunzel has not seen them since she was an infant. The only parent she knows is Mother Gothel (Donna Murphy), a centuries-old woman who stole Rapunzel because of her hair’s magical properties. Gothel keeps Rapunzel isolated in a tower and harnesses the power of Rapunzel ever-growing hair to keep herself young. On her 18th birthday, Rapunzel asks Gothel to allow her to briefly leave the tower. Rapunzel wants to see in person the release of the thousands of sky lanterns that just so happens every year on her birthday. Gothel vehemently refuses.

While Gothel is away, fate steps in when a young, fugitive thief named Flynn Rider (Zachary Levi) arrives at the tower. Rapunzel makes a deal with Rider for him to escort her to the festival of the sky lanterns. With the help of Maximus, a palace guard’s horse, and Pascal, her pet chameleon, Rapunzel and Flynn battle obstacles, including Gothel and Flynn’s former partners, the Stabbington Brothers (Ron Perlman), as their adventure begins to unravel the truth about Rapunzel.

Tangled is like neither Pixar’s computer-animated films nor Disney’s other 3D animated films (like Chicken Little or Meet the Robinsons). Tangled recalls Disney’s animated musical fantasies of two decades ago, especially Beauty and the Beast (1991). This film finds its spirit in songs, anachronistic gags, and the usual mayhem of comic adventure. The animation, however, is old-fashioned Disney. This time technology and software create character drawn in soft lines and shapes, as if they were hand drawn. The production design invents landscapes, cityscapes, scenery, interiors and sets that make the movie look like an oil painting on canvas. The colors are dazzling, and the “sky lantern” sequence (“I See the Light”) evokes magic.

The character animation is surprisingly fluid for a computer-animated film. The characters move with grace, and the vivid facial movement of the characters draw attention to their expressive eyes. The voice performances are quite good, especially Mandy Moore as Rapunzel and Zachary Levi as Flynn. They give their characters complexity and depth, which makes everything about Rapunzel and Flynn seem genuine – from Rapunzel’s wide-eyed curiosity and innocence to Flynn’s rascally nature and his good heart.

Tangled is the new-look 3D animation with the old school, hand drawn charm. It proves that sometimes the classic Disney style is still the best.