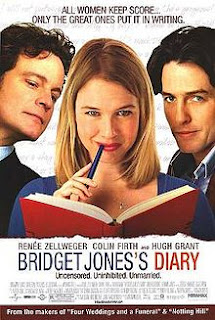 Renée Zellweger earned an Oscar® nomination in the category of “Best Actress in a Leading Role” for her performance in Bridget Jones’s Diary. Bridget Jones (Ms. Zellweger) is a 30-something, single British girl who decides to improve herself (i.e. lose weight) while seeking to find Mr. Right before she becomes an old maid (if she isn’t already that in her own estimation), so Bridget decides to keep a diary of her progress and her trials and travails. Her romantic endeavors eventually focuses on two men

There’s her boss, Daniel Cleaver (Hugh Grant), at a publishing firm, and Mark Darcy (Colin Firth), who was childhood neighbor. Cleaver is a cad who lays ‘em and leaves ‘em, and Darcy is a sharp-tongue, embittered divorcee, who claims to have bad memories of Bridget as a child. Who will finish the film as Bridget’s beau, and will she make an ass of herself before she finds her man?

Although the film story doesn’t amount to much, Bridget Jones’s Diary’s script is witty and bawdy enough to cause blushing. Ms. Zellweger expertly plays the fumbling Bridget Jones, who has a penchant for running off at the mouth and saying the worst things at the worst times. Like her co-stars (especially Grant and Firth), she makes the most of the film’s dialogue; ultimately, it’s what the actors say that defines their characters. If they’d delivered their lines badly, they would have ruined the film; luckily the cast verbally dances around each other like Olympic fencers.

Posted by Leroy Douresseaux at 10:13 AM