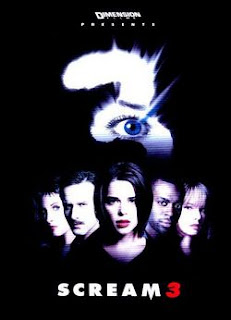 When a series of murders are tied to Stab 3, a movie about the tragic events in her life, the most famous survivor of the Woodsboro massacre, Sidney Prescott (Neve Campbell), leaves her secluded residence in Northern California to visit Stab 3’s Hollywood film set. Of course, the remaining survivors of Woodsboro and of the other Woodsboro-related murders – hot tabloid TV reporter, Gail Weathers (Courteney Cox), and Woodsboro deputy, Dwight “Dewey” Riley (David Arquette), are also on the scene. But they all soon learn that in the third film of a trilogy, all the rules are thrown out the window. The killer could be anyone, and even heroes can die.

Scream 3 is supposedly the closing chapter of the Scream franchise, and it’s a pretty good send off. Ehren Kruger’s script is certainly in the heart and vein of Scream creator Kevin Williamson’s scripts for the first two films. Kruger ably captures the self-referential, meta-lite atmosphere of the earlier films, and Kruger’s is less a satire or homage to horror flicks and more itself a good horror movie.

The cast is good, and the actors really understand their parts. The players who are supposed to be campy murder victims play their parts with relish, while the leads are intense and skillful. But the true hero of Scream 3, as he was for the first two, is horrormeister Wes Craven, who may be the most successful director of horror films in the history of movie making. He’s also skillful and adept at making even the rough spots in this move work, because he helms slasher flicks with the verve of an auteur making art films.

Scream 3 is not great, but it’s scary and funny and hard to stop watching. It’s clever and witty, both in its smart moments and in its lesser scenes. Though it seems to fall apart in some scenes of its last act, the film is worth viewing for its many genuinely creepy moments that keep you on the edge of your seat.