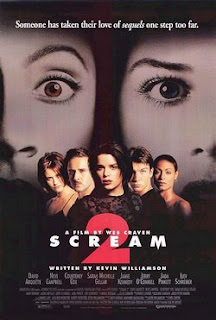 Two years after the shocking events in Scream, Sidney Prescott (Neve Campbell) and Randy Meeks (Jaime Kennedy), the only surviving teens of the Woodsboro massacre, are attending college. Sidney is trying to get on with her life until a copycat killer begins acting out a real-life sequel, and some of Sidney’s college classmates meet a grisly fate at the hands of a knife-wielding killer. Ambitious reporter Gale Weathers (Courteney Cox) and Woodsboro deputy Dewey (David Arquette) are also back as the new killing spree leaves no one safe and no one above suspicion of being the Woodsboro copycat murderer.

Scream 2 is, for the most part, quiet entertaining. It does not, however, have half the wild and crazy energy of the first, and part of that may be because the original film was full of nutty high school kids running amok and having a good time, although there was a murderer in their midst. There are plenty of party crazy college students in the sequel, but we don’t see much of them because the film really zeroes in on Sidney’s character. Wacky kid characters made the first film fun, not female problems. Beyond Sidney’s small circle of associates, no other characters, not even bit players, come in to add something surprising to the mix.

Scream 2 is worth watching, at least for the first hour. After that there are some good moments, but the film begins to fall apart.