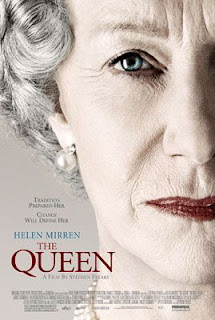 The Queen, a film by Stephen Frears, is a fictional and highly speculative account of the behind the scenes incidents in the week following the shocking death of Prince Diana. Her Majesty Queen Elizabeth II (Helen Mirren, in a role that won her a Best Actress Oscar) and British Prime Minister Tony Blair (Michael Sheen) engage in intimate talks as Blair tries to convince the Queen that the Royal Family should memorialize Princess Diana in a manner beyond standard protocol. The Queen tries to manage the death on a personal and private level with her family, some members of which, want to follow protocol. Meanwhile, Blair deals with the public and members of his own administration that are demanding that the royals give a grand, public funeral for their beloved Diana: the “people’s princess.”

Peter Morgan’s script presents this story as a character study, but the only truly interesting and engaging character in the film is Queen Elizabeth. The Prince Charles of this scenario is almost criminally libelous in the portrayal of the first heir to the British crown as a watery soup of a man. Alex Jennings plays him as a self-serving crybaby looking to lay his troubles at his mother, the Queen’s door. Prince Phillip, the Queen’s husband, is an irretrievable asshole, a noisy loudmouth, and a conceited, stuck-up jerk, and James Cromwell sticks to the script in portraying him that way.

The strongest supporting character in this tale is Prime Minister Tony Blair, and the script presents him as an over-eager suck-up to the Queen – a sad commoner dying for Her Majesty’s attention or maybe scraps from her table. Michael Sheen plays him as such, so it’s hard to distinguish Blair from the Queen’s pet dogs.

Stephen Frears seems to spend most of his time lavishing attention and much of the film’s detail on Helen Mirren as Queen Elizabeth. If there are times in which The Queen seems like a nimble high comedy or a strong, behind-the-scenes character drama, it’s mostly because of Mirren’s performance. She makes this film, and perhaps Frears, who is quite good at character dramas, deserves some credit for both helping Mirren find the character and for letting Mirren as Elizabeth define this film.

Mirren’s physical transformation as Elizabeth is stunning, and though we may credit some of that to makeup, the character performance is Mirren’s own. Every gesture – a turn of the head, a scowl, a frown, a quiet moment of reflection, a tear, or barked order at a subservient establishes this film’s mood, its setting, its overall character, and even moves the plot like no other element in The Queen. Mirren can take a tart comment and turn this movie into an impudent comedy. Just the manner in which she observes someone or something (the stag on the hunting grounds of her estate) can transform the movie into a grand drama about the life of a monarch.

Luckily, Mirren gives such a wonderful performance because, otherwise, The Queen is mediocre.