Review: "THE ADDAMS FAMILY 2" is a Truly Disappointing Sequel 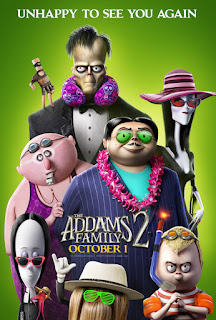 The Addams Family 2 is a 2021 computer-animated supernatural comedy from directors Conrad Vernon and Greg Tiernan.  The film is a sequel to the 2019 animated film, The Addams Family.  Both films are based on the characters created by The New Yorker cartoonist, the late Charles Addams (1912-1988).  The Addams Family 2 focuses on the Addams Family as take a road trip, during which a scientist pursues Wednesday.

The Addams Family 2 opens at a school science fair.  There, Wednesday Addams (Chloe Grace Moretz) presents her experiment, in which she uses DNA from her pet squid, Socrates, on her Uncle Fester (Nick Kroll) to show how humans can be improved.  Wednesday is somewhat put off that her family:  father, Gomez Addams (Oscar Isaac); mother, Morticia (Charlize Theron); and her brother, Pugsley (Javon “Wanna” Walton) have decided to attend the science fair, which is sponsored by the Cyrus Strange Foundation.  Cyrus Strange (Bill Hader) himself appears at the fair as a 3D hologram, and he is instantly drawn to Wednesday experiment and hopes to recruit her to work for him.

Back at home, Gomez Addams worries that the children are drifting apart from him and Morticia.  He decides that a family vacation is just what is needed to keep the family together, so he declares that they are going on a road trip across the United States.  Uncle Fester, Thing (the sentient hand), and Lurch (the butler) join them on the vacation, with everyone packing into an huge, odd-looking camper.  Gomez even takes the family to Miami where he hopes Cousin Itt (Snoop Dogg) can help with the family dilemma.

There is a complication in these vacation plans, however.  Cyrus Strange is determined to have Wednesday, and sends a shady lawyer, Mr. Mustela (Wallace Shawn), and a brutish henchman, Pongo (Ted Evans) to trick Gomez and Morticia into believing that Wednesday might be Cyrus' child.  Wednesday is already having doubts about her connections to the Addams Family, so which family will she decide to choose, the Addams or Cyrus Strange?

The Addams Family 2019 was enough of a hit that producing a sequel probably seemed obvious to MGM, which holds the rights to produce Addams Family film and television series.  The end result is something that looks and feels like a sequel that was rushed into production.  The idea of Wednesday not being an Addams is a ridiculous plot.  I can certainly accept the notion of a precocious child wondering about her parentage and lineage.  However, if she is different from the rest of her family, it is because each member of the Addams Family is different from all others.  That is the point this film makes at end of the story, but we didn't need an entire mediocre movie to tell us that.  Raising questions about Wednesday's family is just a lame plot line.

So, it goes without saying that I did not like this film.  The Addams Family 2 ends up being the latest in a long line of pitiful Hollywood road trip movies.  I will say that the last 17 minutes of the film – before the end credits – are actually good.  It is the only time that the film has any real conflict, melodrama, or action, and what happens in these seventeen minutes is actually consequential to the both the Addams Family and a few other supporting characters.

The Addams Family 2019 is my favorite media adaptation of “The Addams Family” characters outside of the 1960s and 1970s.  It manages to be sweet, charming, heartwarming, and, of course, macabre – the way it should be.  I gave it a B+, but The Addams Family 2 bored the hell outta me until the last seventeen minutes.  I'm being generous giving it a C.