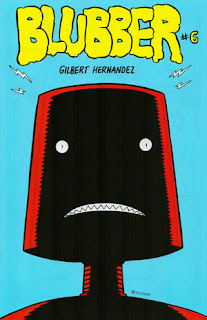 Blubber is an intermittently published, black and white, alternative comic book series written and drawn by Gilbert Hernandez, cartoonist, comic book creator, and graphic novelist.  He is best known for being one-half of the duo referred to as “Los Bros.”  Gilbert and his brother, Jaime Hernandez, are Eisner Award (Will Eisner Comics Industry Awards) winners, and they have produced the seminal, alternative comic book series, Love and Rockets (Fantagraphics Books), for the last four-plus decades.

Blubber offers short stories and vignettes featuring a cast of misfits, monsters, and anthropomorphic types.  Beto also presents his usual mix of bizarre characters, strange stories, and outlandish sex and sexual acts, all hallmarks of his comic book output going back to the beginning of his early career.

Blubber #6 is comprised of multiple one-pagers and a few short stories.  It also opens with a one-page comic inside the front cover (frontispiece) and ends with another story inside the back cover.  I'll discuss each story individually, to one extent or another.

THE LOWDOWN:  The inside front cover story is entitled “Giving It a Go.”  It's about giving a device called the “Fuck-U-Later” a go.  Mila gives it a go.

That I don't find this disgusting says a lot about me.  That I kinda wish there was such a device...

As usual, Beto shows the facility of his pen in drawing exaggerated genitalia.  However, he does “stick the landing” by drawing natural looking genitalia on Page 3.

“But is it Pretty?”:
Corazon has breasts that aren't real, but feel real.  She does however have a well-endowed member that is real.  Well, Mila wants to put that member to use.

“The Nahanny”:
Peaky, the athletic trainer who appeared in “Ulu Extreme Productions Present 'Young, Fast and Scientific',” is back in this half-page, five-panel story.”  A non-human character wants to suck on her biceps.

I like Beto's design work on the non-human character, whose name may be Kemp or “The Nahanny.”  Beto's character designing talent is probably not appreciated enough.  I can see the influence of “Silver Age” comic books on this genius in “slick” drawings.

This story shares the page with “The Nahanny.”  The panels are almost too small to read, but I didn't let that stop me.  And I like the characters.

“The Damn Loo!”:
“Tin Man,” the robot character featured on the cover, (sexually) assaults one of Beto's signature cryptids, the “Loo.”

Once again, I am digging the design of the Loo.

“Cisnero's Secret”:
Pipusi spurns the advances of Cristobol and Efren, but she takes it up the bum from Cisnero.  Apparently, this action takes place with The Beatles 1967 pop tune, “Strawberry Fields Forever,” playing in the background.

I like that this one-pager deals with something that vex's almost all men.

“Gay Wheeler”:
Gay Wheeler is not gay … but he is willing to perform oral on Max, who says he isn't gay either.

This a cute story, but it gets better when Beto offers us Corazon' ability to bang her own boobs.

“Don't Fuck with the Loo”:
This time the Loo gets the best of Tin Man.

“The Thighs Have It!”:
Efren takes advantage of Kolchak's thighs, among other sexual delights.  Cisnero and “Strawberry Fields Forever” guest star.

All I can say about this one-page is that the thighs do indeed have it.  This story also shows off Beto's talent at cartooning the human figure.

“The Fruit of His Loins”:
The story focuses on a young man who is referred to as “Our Man,” but his name may be “Norte.”

“Plunk” and “Clipper” are indeed true pornographic comics.  That's a good thing, and they're kinda nice.

“Dr. Sanz Was What?”:
Dr. Sanz wants to create a stimulant for penis augmentation.  After inventing a formula, he tries it on himself.  A dream shows him the possibilities of having an augmented member … the bad … and the good.

Beto's drawings of Dr. Sanz's face recalls the similarity of his graphical style to the late writer-artist Darwyn Cooke's.  The two collaborated on the odd miniseries, "The Twilight Children" (DC/Vertigo, 2016), and “Dr. Sanz Was What?” makes me think that they did share some aesthetics.

“Wilfer's Way”:
Wilfred likes to bang breasts and finds all other sexual acts to be nonsense.  But what if Pupusi could come up with something that was like fun-bag-fun, but not exactly it?

This one pager may be the best story this issue.

“Tamba”:
Peaky is enjoying sex with men, but is she ready for sex with cryptids?

What would Blubber be without multiple sex-with-cryptids stories?

“Fuck the Loo”:
Tin Man and Snowman the cryptid wreck the Loo.

A funny story, especially because we learn that the Loo is a Republican.

“Zoe Loves Her Work!”:
Zoe loves her work – having sex.  Cisnero, Mila, and Efren do, too!

What can I say about this story.  I love reviewing comic books when it lets me read stories like this.

“Submitted for Your Disapproval”:
Baby meets Corazon … in a way.

I can love this story because Baby is in it.

The inside the back cover story is “Secret Sex.”  This story takes place partially in Efren's past and is about a woman he banged 35 years ago.  This is a lovingly drawn 20-panel one-page story.  I'd like to have the original art for it.

After reading any issue of Blubber, I think that Gilbert Hernandez is the only modern cartoonist doing true modern underground comics.  Blubber recalls the classic erotic/porn comics of R. Crumb, but Hernandez's work is more purely surreal.  I treasure Blubber #6, as I do every issue, because I see it as a gift from the rebellious spirit of a master of alternative comics.  Plus, my mind played “Strawberry Fields Forever” throughout the entire issue.

Blubber is the product of a master who just draws whatever the heck he wants to draw.  He submits it for your disapproval, and probably wants you to disapprove, dear readers.  But I won't, King Gilbert.  I'll always approve.

I READS YOU RECOMMENDS:  Fans of Gilbert Hernandez must have Blubber.

Posted by Leroy Douresseaux at 1:52 PM