Review: "SORRY TO BOTHER YOU" is Fresh and Audacious 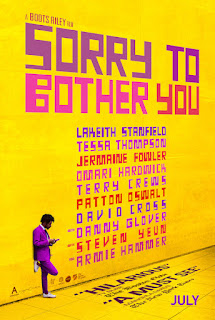 Sorry to Bother You is a 2018 satirical, science fiction, and black comedy film written and directed by Boots Riley.  The film follows a young African-American telemarketer who discovers the key to professional success and personal wealth, which also propels him into a world of corporate conspiracy and greed.

Sorry to Bother You opens in an alternate version of present-day Oakland, California.  Cassius “Cash” Green (LaKeith Stanfield) is a young African-American man who struggles to be gainfully employed.  He and his girlfriend, Detroit (Tessa Thompson), an artist, live with Cash's uncle, Sergio Green (Terry Crews), specifically in Uncle's Sergio's garage.  Cash learns about a job opportunity at the place of employment of his friend, Salvadore a.k.a. “Sal” (Jermaine Fowler).

Sal works as a telemarketer for a company called “RegalView.”  Cash manages to get a job, and his bosses, Johnny (Michael K. Sommers) and Anderson (Robert Longstreet), emphasize that he must “stick to the script” (S.T.T.P) when making sales calls.  He struggles with the job until an older African-American co-worker, Langston (Danny Glover), tells Cash that he must adopt a “white voice” when making sales calls.  After a few misfires, Cash eventually creates his own “white voice” (spoken by actor David Cross), and it works!  Soon, Cash is so good at selling products to the people he calls that his bosses dub him a “Power Caller.”

Meanwhile, Cash's coworker, Squeeze (Steven Yeun), has formed a union, and now, he wants to recruit Cash, Detroit, and Sal as union activists.  However, Cash is finally making some big money for the first time in his life, and when he moves on up to the luxurious Power Caller suite, he does not want to give that up.  When he starts selling for RegalView's main corporate client, WorryFree, Cash is forced to decide between his friends and selling his soul as part of a terrible corporate conspiracy.

Sorry to Bother You is one of those hybrid comedy film that blends dark humor, satire, science fiction, and adventure in a way that comments on the contemporary times in which the film debuted.  Sorry to Bother You reminds me of films like director Terry Gilliam's Brazil (1985) and director Mike Judge's Idiocracy (2006).  Like those films, Sorry to Bother You eviscerates the power elites and the institutions that guide and even control society.

Like Judge's other satirical film, Office Space (1999), Sorry to Bother You perfectly captures the contemporary landscape of working America:  underpaid workers who are like drones; the difficulties of unionizing workplaces; using promotions to separate workers; pitting workers against each other; middle managers who act like overseers; and a narcissistic ownership class that doesn't know and doesn't want to know anything … that does not get them what they want.

In Sorry to Bother You, writer-director Boots Riley offers a bold vision of today with crazy, twisted apt metaphors that relate to now and to the near-future.  My one quibble with the film is that the characters are not quite one-dimensional, but they do lack true depth.  Steven Yeun adds some bump to his rabble rouser, Squeeze, as does Jermaine Fowler with his character, Sal.  However, it seems as if LaKeith Stanfield as Cash and Tessa Thompson as Detroit use their performances to bring their characters to heights to which the film's script does not aspire.  The film is almost over by the time these characters really start to command and shape the direction of the story, which Riley drives using a complex plot, an involved story line, and lots of amazing ideas.

It is a shame that upon its theatrical release audiences did not watch Sorry to Bother You the way they watched big-tent, event pictures.  At one point in the film, one of the characters in Sorry to Bother You says that when people discover a problem that they can't fix, they ignore it.  Sorry to Bother You doesn't offer easy answers, but it does ask that people get involved … and think.  Sorry to Bother You is as entertaining as most superhero movies, and without being preachy, it also asks the people to be heroes against villains and the injustice they perpetuate.  There are many home entertainment options for audiences to discover this wonderful and relevant movie.

The text is copyright © 2022 Leroy Douresseaux. All Rights Reserved. Contact this blog or site for syndication rights and fees.

Posted by Leroy Douresseaux at 5:40 AM