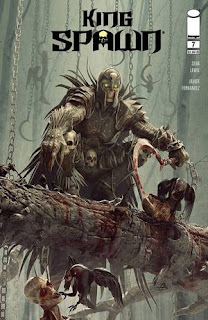 A year ago, (February 2021), Todd McFarlane announced his plans to build a larger, multi-character, interconnected, comic book universe based around his Spawn comic book – a “Spawn Universe.”  McFarlane also announced four new comic book titles coming out in 2021, with three of them continuing as regular monthly titles.

One of them is King Spawn.  This series is written by Sean Lewis; drawn by Javi Fernandez; colored by FCO Plascencia; lettered by Andworld Design.  King Spawn finds Spawn battling the members of a dark conspiracy that wants to force him to accept his crown.

King Spawn #7 opens in the wake of the terrible battle between Spawn and the “Disruptor,” who Jason Wynn, the late director of the U.S. Security Group … and Al Simmons' former boss … who betrayed him.  Spawn and Terry have arrived in New York City, where Spawn's journey began.  Now, he's here to kick some ass.

But NYC is exactly where the Court of Priests wants Spawn to be.  Here is where they will scheme Spawn into ascending the “Godthrone” and become the King of this world and others.  But first, they will force Spawn to relive one of the worst moments of his existence – the death of Wanda Blake, who was Al Simmons' wife … before she became Terry's wife.

THE LOWDOWN:  King Spawn continues to be the best Spawn spin-off comic book to date.  This hybrid of dark fantasy, the supernatural, and superheroes is a king of a comic book.

Writer Sean Lewis continues to spin his wicked webs of violent action and occult-infused plots.  Lewis makes King Spawn true to the heart of darkness that is the Spawn concept.  In the world of Spawn, no ass is too innocent for a capping, and Lewis has the Hellspawn balls to pull the narrative trigger.

Also, the art of Javi Fernandez evolves into a lovely combination of straight-forward storytelling with a stylish sense of design that recalls early Spawn Todd McFarlane and Sin City Frank Miller.  Plus, Fernandez offers some eye-popping graphic design in the design of the pages and in the contents of the panels.  Some pages even look like graffiti, protest street art, and geographical maps, which give the story a sense of breath and depth.

King Spawn #7 has the narrative hellfire to keep your imagination warm.  You know you want it.

[This comic book includes “Spawning Ground” Presents “The Breakdown,” which is entitled “What They Wanted You to Believe...” and is about the death of Wanda Blake.]

Posted by Leroy Douresseaux at 2:51 PM