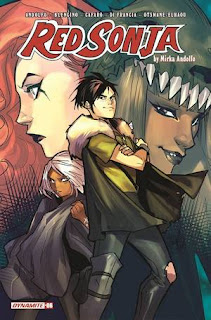 Red Sonja Volume 6 #6 opens in the village as the “Feud of the Seven Gallows.”  Here, there is only one law in which the penalty is death, the “First Law.”  Unfortunately, no one knows the true nature of this law, which has complicated matters for two visitors to the village.  That is the place where Red Sonja was taken prisoner, held by orders of the village's ruler, Baroness Drang.

Meanwhile, Sitha, who escaped imprisonment, now lives in an underground hole with Kebra, a 16-year-old thief, and the orphan waifs for which she cares.  But Kebra has plans to rob Drang's treasure chamber, but to do that, she needs Sitha's powers.

Sitha's powers come from “Xamul,” the demigoddess of fire, wind, and fury that resides in her.  So can she learn to control the uncontrollable in time to both rescue Sonja (whom she calls “mother”) and help Kebra gain her treasure?

THE LOWDOWN:   In July 2021, Dynamite Entertainment's marketing department began providing me with PDF review copies of some of their titles.  One of them is Red Sonja Volume 6 #6 which is the latest of several Dynamite Entertainment Red Sonja comic books that I have read.  This is also only the eighth issue of a Mirka Andolfo comic book that I have read.

Andolfo and Luca Blengino have managed to extend this story past the point that I thought they reasonable could.  They have done so with an epic mother and daughter tale that seems to straddle most of the lands upon which Red Sonja's boots and tread.  The writers continue to offer big changes and move the story to new strange, faraway lands, as the leads face trials and tribulations.  This is sword and sorcery with an emphasis on character drama and relationships.

Posted by Leroy Douresseaux at 11:30 AM